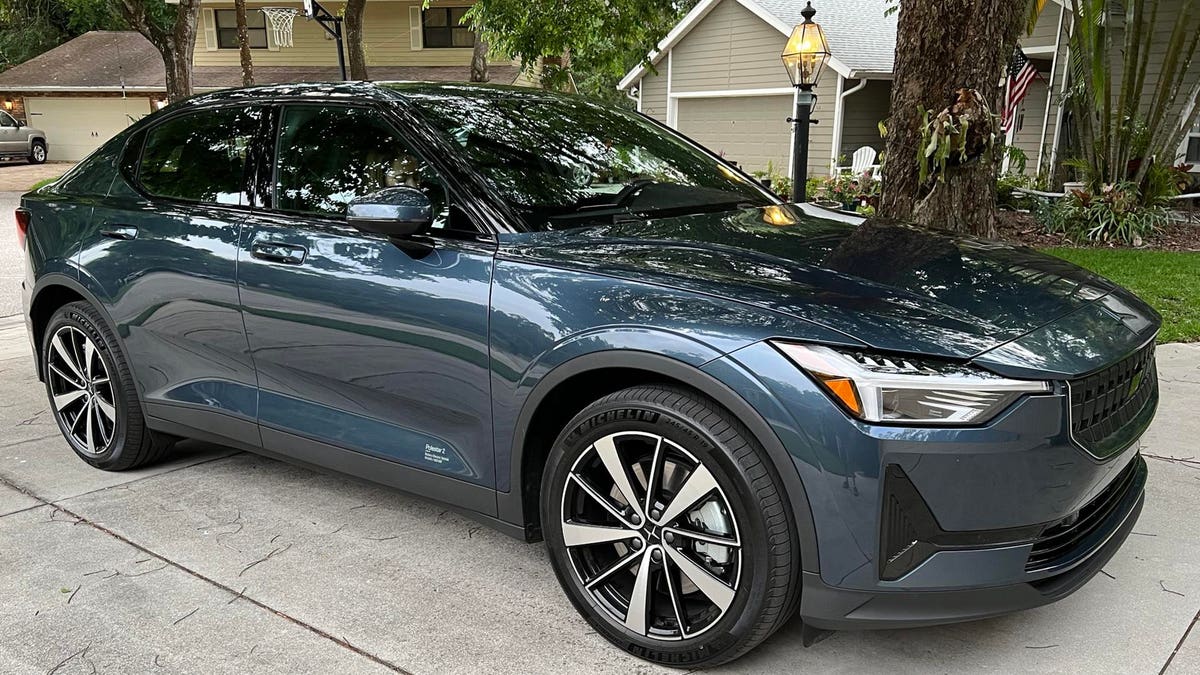 The Polestar 2 is a minimalist and powerful driving oasis

I’ve never really been a car guy. I still am not. You start talking about torque and horsepower and my eyes glaze over. But after getting behind the wheel of the Mustang Mach-E last year, I found myself eager to see what else was on the market. Once you turn the car into a giant gadget, that’s something I can relate to.

So I was really excited when Polestar offered their latest, the Polestar 2, for a weekend. Here’s a car that wasn’t just a gimmicky ICE vehicle, but a car that was built with Google in mind from the start.

They also take sustainability seriously, going so far as to use blockchain technology to ensure their rare earth metals in their 2023 vehicles are ethically sourced. And they go beyond slamming a battery into their vehicles and calling it durable. Their entire processing chain is also focused on using renewable materials whenever possible.

Indeed, what impressed me from the second the Polestar 2 rolled into my driveway was the solidity of the vehicle’s build, its sheer presence. That shouldn’t be surprising, though, given their Volvo origins. The company has made it a point to go its own way in recent years and, indeed, you won’t find more than a handful of clues linking them to their Swedish founders.

As I settled into the Polestar 2, I was surprised at how close the driver’s cockpit was. And with the high door sills and the dividing center console, “cockpit” is really the only descriptor that makes sense. While rear passengers have plenty of space, that extra cabin space afforded by the Polestar 2’s long wheelbase is reduced to the point of being almost claustrophobic.

Fortunately, the driving experience reduces this feeling. When you step on the throttle, both motors engage and propel you forward if you get a little too aggressive. Hooking up to 60 mph from a dead stop in just over 4 seconds is incredibly easy to do. It’s like having your own personal roller coaster. Getting caught at a stop light as it suddenly changes becomes enjoyable because it means you’re the first off the line and can take off.

Braking is pronounced and effective. If you set regenerative braking to standard, taking your foot off the throttle will bring you to a very sudden stop. You can adjust it to be a bit more subtle. You can even add forward creep if you want. You’ll want to play around with the settings to see what works best for your riding style (and for your passengers, my wife was practically green on our first few rides while I calculated throttle and brake responses, sorry Dear).

The Polestar 2 cockpit surrounds you with minimalist calm. Unlike American manufacturers who bombard you with brightly colored displays on the center screen and dashboard, Polestar uses a selective color palette with plenty of contrast so you can get all the information you need from a a look.

That’s not to say the Polestar 2’s displays aren’t fully capable. Pull up Google Maps on the console or activate it on the dashboard and you get a color experience, just like you would on your phone. It’s just that you don’t constantly have to navigate through a changing cacophony of colors. Polestar’s interface engineers understand that driving a vehicle can be tricky and make sure you have just enough information at the right time.

The feeling of a driving oasis is complemented by the absolutely incomparable cabin environment. The noise does not intervene. There’s no engine rumble made here. You hear the faintest sci-fi wooshes as you drive, maybe a low chime as you back up (this is more for pedestrians and a wonderful touch). Even on the highway, road noise doesn’t intrude, even at high speeds (again, be careful, it’s alarmingly easy to rocket up to max throttle).

The design of the cabin lighting also surprised me. The base model has mid or low mood lights, which I honestly couldn’t tell the difference. But it is okay. While some EVs, like the Chevrolet Bolt, have interior lighting that looks like something out of TRON, after a while you just want some visual calm.

Also, do they give car awards for reading lights? My daughter was reading in the back seat and asked if she could turn on her light (I usually say no because the light blast in most cars destroys my rear visibility). I said yes, then after a few minutes I said yes again. At that time she told me it was already on. Shocked, I spun around in my seat at the next stoplight to see her book bathed in soft LED light. The map light was so focused and so perfectly angled that it didn’t interfere with the driver’s visibility at all.

The fit and finish of the cabin is impeccable. There are tons of soft touch materials and everything you come in contact with is premium quality.

It’s incredible attention to detail and craftsmanship touches like that that leave me baffled as to why Polestar made the decisions they did on some of the base model features.

Well, I know why they made the decision and it rhymes with “cooking honey”.

While the base Polestar 2 model is extremely able. The company has designed its add-on packages so that if you want to get all the features you enjoy in most other modern vehicles, you have to add thousands to upgrade.

For example, the base Polestar 2 model comes with beautiful frameless exterior mirrors. They are motorized and tilt out of the way when parked. You can even set them to tilt down when you’re backing up to see pedestrians better. What theyre doing do not come with blind spot warning indicators.

This is unfortunate for several reasons. My Chevy Bolt, which costs about $20,000 less than the Polestar 2, has them standard on all models. Almost all modern cars do this, as it is a basic safety feature proven to reduce accidents. If the Polestar 2 had large windows and good visibility this would be less of an issue, but I can attest that there are some major blind spots on the Polestar 2. If you want to avoid dragging someone sideways , you need to go to $3,200. Pilot package. Of course, this package includes many very interesting additional improvements, such as adaptive cruise control and a 360-degree camera. But not everyone needs pixel headlights. Everyone should have blind spot warning indicators.

The next exclusion puzzle is inside the Polestar. There is a very capable 4-way electric adjustment for the base of the front seats. There’s even a 4-way power lumbar control. What it doesn’t have is electric backrest adjustment. To adjust the base model backrest, you will need to use a manual knob. It’s a confusing nod to Polestar’s Volvo roots and just doesn’t make sense in today’s standard power environment. If you want the “luxury” of adjusting your seat fore and aft without feeling like you’re putting the lid on a jar of peanut butter, you’ll need to upgrade to the $4,000 Plus pack, which also adds a sunroof panoramic. That’s right, you have to replace the whole roof if you want a full power seat.

The Plus pack also includes upgraded Harmon Kardon speakers (which you don’t need, the basic sound system is great), a heat pump to increase range (good for northern drivers), a steering wheel and heated rear seats and wireless inductive charging for your phone, plus several other features. It’s a solid upgrade package, but again, forcing yourself to get on a sunroof to get a full power seat is the kind of cash grab that’s been happening ever since sales people say “what should I do to put you in this car today?”

Aside from the package, I have to point out that the base model has some really nice features. The Polestar 2 is, technically, a crossover vehicle due to the power tailgate instead of a trunk in the rear of the vehicle. I was pleasantly surprised to find that the hatch can be motion activated. I have often taken the opportunity to fill it with provisions. There’s plenty of room for more than a few bags or, in our case, beach chairs and gear. There is a cavity under the false floor, but this is for the Level 1 charging cable that comes as standard.

If you need more space, there’s always the frunk. It’s not as bulky as the Mach-E, but you can fit a few small packages in the front. The limitations there, as with most frunks, is that it’s not air-conditioned and manually locked (so you have to open it from the inside).

Most of the time, you’ll charge the Polestar 2 with a Level 2 charger (takes about 6 hours). However, when you’re ready to take a longer trip, the company claims the Polestar 2 can charge up to 80 per cent from a Level 3 charger in less than an hour. The built-in Google Maps has special features just to plan your route to include said chargers.

Speaking of which, the charging port itself is extremely well thought out, with a status indicator LED as standard. The port locks the charger in place, requiring the push of a button to release. A minor but appreciated deterrent against accidental charger disconnects. With a range of 240, range anxiety isn’t much of an issue. It’ll be even less of a concern when the single-motor Polestar 2 arrives in the US, bringing with it an additional 30 miles of range.

Tesla in the rear view mirror

With Tesla raising prices and Ford’s impeccable Mustang Mach E being sold out for the rest of the year, it’s a great time to explore equally good options, but don’t appreciate the big guys’ share of mind. brands. Options like the Polestar 2.

The base model starts at $49,900 before shipping and taxes. Configurable models are currently on hold, but you can view their preconfigured inventory on the Polestar website.