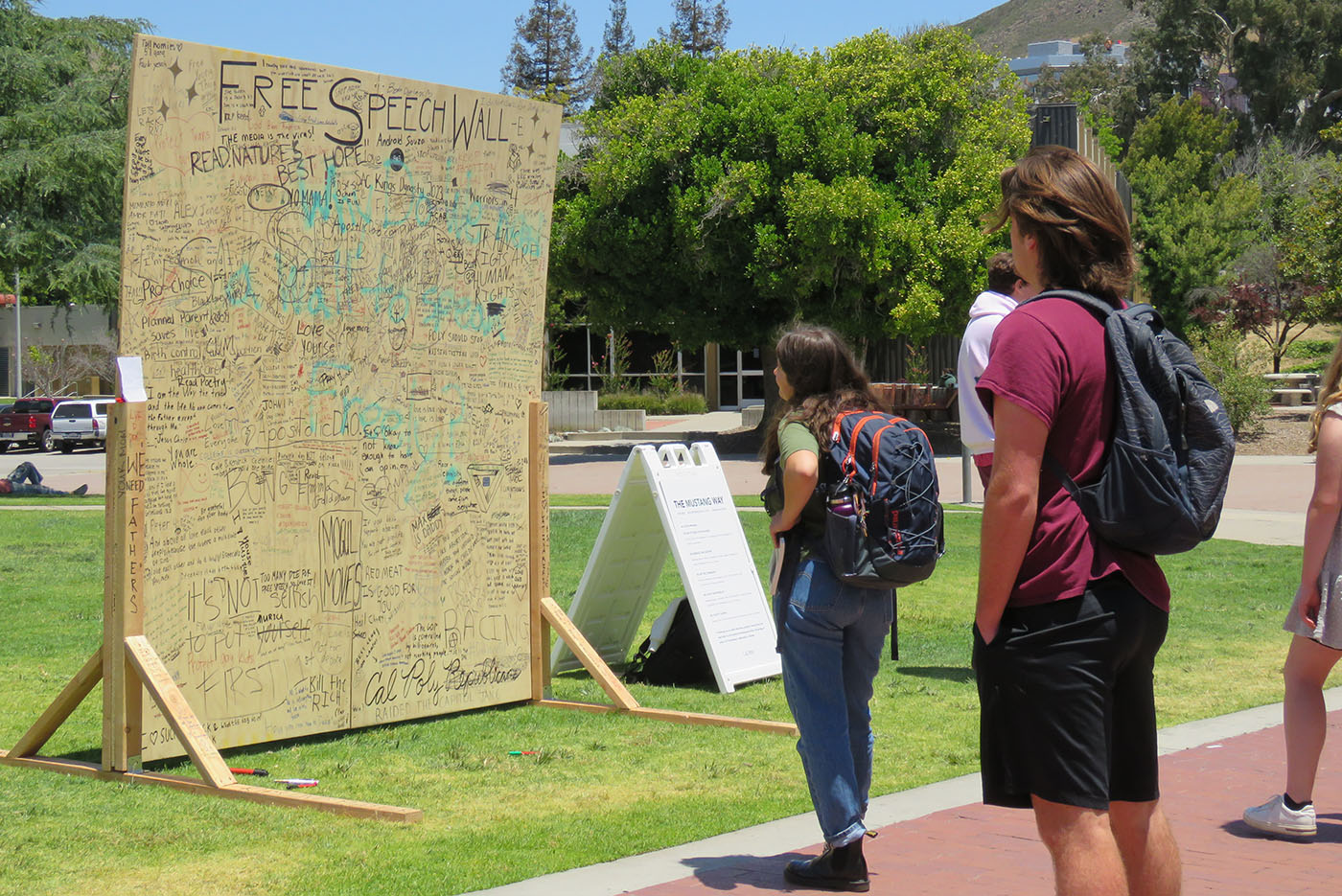 It took less than three days for someone to draw a swastika on Dexter Lawn’s free speech wall.

The wall — which Cal Poly College Republicans put up on campus every year — has always been a platform for hate speech at Cal Poly.

Mustang News became aware of the swastika on the wall Wednesday afternoon. The swastika was surrounded by two smiling faces and was drawn next to a Star of David.

Economics junior Joe Schneider has been in front of the wall all week and decided to take a closer look at his posts on Wednesday afternoon. That’s when he noticed the swastika.

“I’m very disgusted,” said Schneider, who is Jewish. “It definitely ruined my day.”

He took a photo of the hate symbol and walked away from the wall to share what happened with members of Hillel of San Luis Obispo, a Jewish student organization in San Luis Obispo. A few minutes later, he returned to the wall and found the swastika scribbled on with a black marker.

Regardless of the cover-up, Hillel president Jianna Gladfelter said the damage was already done. The wall creates the perfect opportunity for someone to write hate speech anonymously and Republicans at Cal Poly College should moderate the wall for hate and bigoted speech, she said.

“The symbol represents the thought that people wanted to kill Jews,” Gladfelter said. “They were clearly trying to send a message to our community that we shouldn’t — we can’t feel safe on this campus.”

The wall contains other messages of choice. “Fuck Nazis” has been crossed out and replaced with “Love Everyone” written directly above.

Other posts include “Don’t Say The Gay Law Protects Children From Sexual Talk” and “Masks Are For Slaves.”

The club posted on Instagram on Wednesday that they condemned Nazi ideology and symbology, but claimed the free speech wall had received overwhelmingly positive feedback.

The day before, the club had posted on Instagram a photo of two people in front of the freedom of expression wall giving a thumbs up. Both people have their faces covered, one with an image of Tucker Carlson and the other with an image of Theodore Roosevelt.

Cal Poly spokesman Matt Lazier told Mustang News that Cal Poly denounces racist speech and actions, which he says are inconsistent with Cal Poly’s values. Lazier added that while the university wants to be able to ban hate language on campus, federal law prohibits it.

“As a state institution and public campus, Cal Poly is obligated to support free speech, even though we find the actions of individuals who choose to post disgusting, racist, sexist, homophobic or any another intentionally hurtful and offensive expression,” Lazier wrote to Mustang News via email.

Cal Poly Hillel posted a statement on Instagram on Wednesday, noting that the swastika is hate speech.

“You are not responsible for resolving hate, but neither are you free to ignore it when it’s written on your wall,” Cal Poly Hillel’s statement read.

The organization encouraged anyone with information about who drew the swastika to contact Hillel, university administrators or ASI.

Vice President Keith Humphrey sent a campus-wide email on Friday addressing the free speech wall, explaining how the university is unable to intervene and his hope that students continue to denounce hate speech.

“I also know that hate speech on your college campus can create feelings of fear,” Humphrey wrote. “In a world that all too often sees ideas of hate turn into acts of violence, these feelings are real.”

A long-standing platform for sectarian messages

Every year since 2011, Cal Poly College Republicans have erected the Free Speech Wall on Dexter Lawn. The club has told Mustang News in the past that the tradition celebrates freedom of speech and is meant to commemorate the fall of the Berlin Wall.

The wall has consistently displayed hateful and bigoted messages in the past. In 2015, the wall contained Homophobic and Islamophobic messages, according to past coverage of Mustang News. The wall looked like 2016, when it contained “transphobic, anti-Islamic, racist and sexist slurs.”

Beginning with the 2017–18 academic year, the club ceased erecting the wall in November on dates commemorating the fall of the Berlin Wall and instead began placing it on campus during the spring term.

Student activists were upset that the wall, which has come to depict bigoted and hateful messages on campus, was erected on campus on such a weekend, as Mustang News previously reported.

In the past, Cal Poly officials have had conversations with the club about its annual free speech wall. Lazier could not name specific officials and wrote that the university cannot limit the club’s activities because it follows all university policies and procedures when creating the wall.

Cal Poly College Republican Club Secretary Sean Senn told Mustang News that the free speech wall is important because there is a growing culture that discourages the public sharing of conservative viewpoints.

The First Amendment protects people from government violation of their free speech rights. Senn was unable to name a case where Cal Poly violated anyone’s free speech rights, including the rights of conservative students, and added that his concern stems from whether this could happen at the future.

Senn agreed that the free speech wall has a history of platforming bigotry and hate speech, which puts it at odds with making students from marginalized backgrounds feel welcome on campus.

For Senn, the free speech wall is the more important of the two.

“The principle of giving a platform to all beliefs, even if they are bigoted, is more important than the stress caused by these bigoted and hateful comments,” Senn told Mustang News.

Senn confirmed that the Cal Poly College Republican Club erects the wall every school year of their own volition and he said that if anyone is offended by what’s on it, they can simply choose not to. to look at it.

“If you’re worried about being distressed or hurt by the wall, you’re free to ignore the wall,” Senn said.

It’s not that simple, said Gladfelter, president of Hillel. A swastika represents trauma for the Jewish people and for many others who suffered under the Nazi regime.

“This trauma crosses generations,” Gladfelter said. “So to remember that, especially next to a symbol that represents our community, is so scary because it really looks like a threat.”