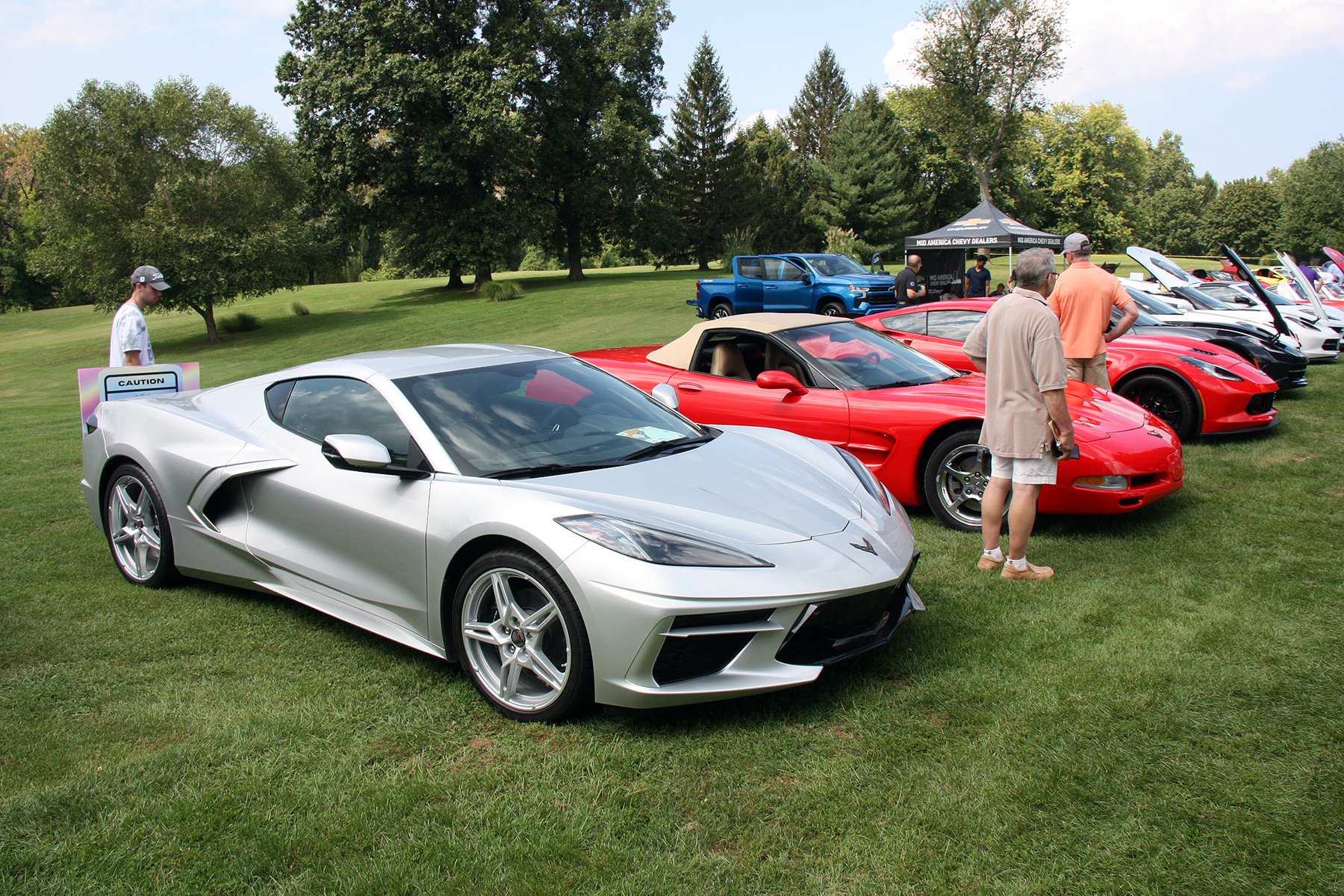 This is a carousel. Use the Next and Previous buttons to navigate

While the temperatures weren’t as hot as they were seen last month, the sun greeted visitors who flocked to the American Legion Post for the third annual Kicks on 66 Car Show on Saturday in Edwardsville.

A portion of the show’s proceeds and donations went to Backstoppers and Partners 4 Pets. The show is held in memory of Randy Gori, an avid Ferrari collector and prominent Edwardsville lawyer, who was instrumental in planning the inaugural Kicks on 66 event.

As of Sept. 5, Kicks on 66 officials said more than 350 vehicles had signed up and they expected more through Saturday’s event. Nominations came from throughout the St. Louis metro area, as well as Quincy, Centralia, and Columbia, Missouri.

Paul Harris stood by his silver 2020 Chevrolet Corvette answering questions from onlookers. He told his dealer he had to have a 2020, the first year of the current eighth-generation model.

“You fall into it,” he said, describing getting into the car. “And every time I get out of it, I’m reminded that it’s a young man’s car. Buy one before you get arthritis or creaky joints.

Kevin Williams of St. Louis brought his 1964 Cadillac Coupe de Ville to the show. Dressed in Lime Green Metallic (code 34) with a padded white crossgrain vinyl roof (code 61) and Lime Dorchester cloth upholstery with white leather trim (code 48). This model year was also the last for fins, although some purists might argue that fins continued for two or three years before disappearing altogether.

He said he had owned the car for 11 years. He had specifically sought out a Coupe de Ville from 1964 and fell in love with the color combination of it. 1964 was the first year of Cadillac’s 429 CID (7.0 L) V8. His 429 is backed by a Turbo Hydramatic 400 three-speed automatic transmission.

The luxury market, however, was not immune to the power race that reigned in the 1960s. Competition from Lincoln and Chrysler’s Imperial forced Cadillac to up its ante later in the decade to 472 cubic inches. (7.7 L) and culminating in a 500 cu in (8.2 L) V-8 that lasted until downsizing set in in the 1970s.

Williams said the car’s ride and power are among its strengths. He specifies that this model is a Series 63, which is rare. He said he got offers to sell it every time he came out of the garage with it.

“I have no intention of giving up,” Williams said. “I had no problems with it. For its age it is a very good car.

Along the way, Ryan Hotz brought his black 1987 Pontiac Firebird coupe that was modified to look like the car from NBC’s hit ’80s TV show, “Knight Rider.” There was the oscillating red light in the front center between the headlights and it even installed a copy of the voice chip with lines from William Daniels, the actor who voiced the car in the show.

Chris Tracy from Troy brought his 1969 Oldsmobile 442 Convertible, parked alongside other cars from the Archway Olds Club in St. Louis. Finished in a crimson red exterior with a parchment vinyl interior, the car features a 400 CID V-8 engine, a Turbo Hydramatic 400 three-speed automatic transmission and a 12-bolt rear axle with several modifications. . The 442 was the performance variant of Oldsmobile’s A-body midsize car. Collectors covet GM A-bodies made between 1968 and 1972, particularly the Chevelle Super Sport from Chevy, the GTO from Pontiac and the Gran Sport from Buick in addition to the 442.

Nearby, Cindy Gatton’s 1970 Mercury Cougar Convertible was a stunning entry. The Cougar started life as a high-end pony car, which offered an alternative to its corporate cousin, the Ford Mustang. 1970 was the last model year for the first generation model.

A few rows down was the red copy of Bruce Trickel’s 1971 Ford Maverick Grabber coupe with a 302 CID V-8. The Maverick, unlike today’s small pickup, was a compact coupe and sedan launched the previous year, along with its companion Mercury Comet models. Hotz, Gatton, Tracy and Trickel were all away from their vehicles when a reporter drove past their vehicles.

Kicks on 66 included more than cars. Motorcycles, vans and 4×4 trucks were all invited.

Even within the cars, the show had various participants such as T-Buckets (Ford Model T hot rods), dragsters, hot rods (other than Model Ts), restomods (classic cars that have modern upgrades) or crunked (lowered) cars.

Cars were also organized by make or model name – Corvettes in one section, Firebirds in another row, Oldsmobiles, Cadillacs, Porsches, Mercedes-Benz, MGs, Pontiacs, etc. There was even a section for orphan vehicles or brands that aren’t made and sold anymore, like the Saturn or Hudson or Tucker that entered the show.

Planning for the fourth annual Kicks on 66 Car Show in 2023 may have already begun.