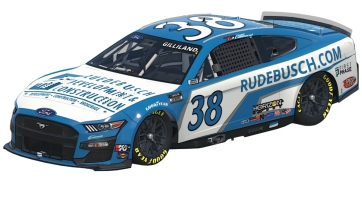 RDC will join FRM and Gilliland from World Wide Technology Raceway to start June. They will return for two road races in July at their home circuit, Road America, and back at the famous Indianapolis Motor Speedway.

“It’s a new NASCAR season and we’re ready to partner with Front Row Motorsports, Todd Gilliland and make the leap into the NASCAR Cup Series this year,” said Carl Ruedebusch, owner, Ruedebusch Development and Construction. “We have seen Todd grow and believe he is an incredibly talented driver who will learn a lot in his first year. We are proud to support him in his endeavours.

Gilliland is delighted to welcome a new partner and happy to be the driver they have chosen for their first season in the NASCAR Cup Series.

“Mr. Ruedebusch has always been a friend and loyal supporter of my father,” Gilliland said. “He was quick to help my program this year and that means a lot. I want to make him proud this year.

Gilliland is gearing up to make his Daytona 500 debut this Sunday, February 20 on FOX.