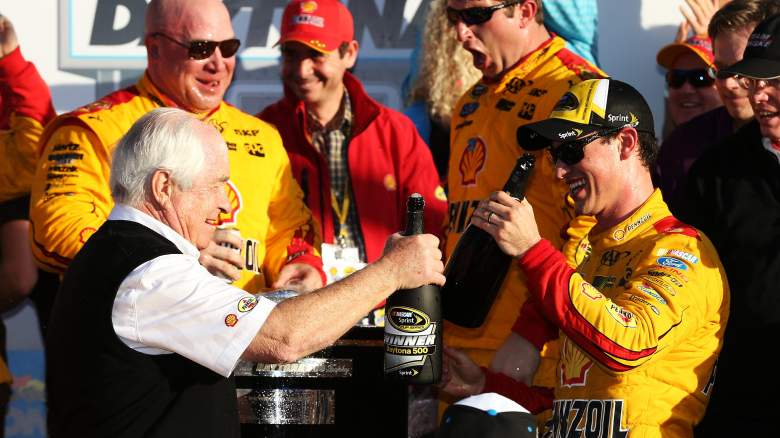 Joey Logano (right) will potentially sign a new contract in the near future.

Roger Penske has addressed one of the biggest questions of the season. He told NASCAR Cup Series fans to “stay tuned” to Joey Logano’s contract extension with Team Penske.

Penske made the comments to NBC Sports ahead of race weekend at Indianapolis Motor Speedway. He was faced with questions about the driver for No. 22, as well as the possibility of signing Kyle Busch. Penske told fans to “stay tuned” regarding Logano’s contract before adding “I would say I’m smiling” to provide additional reassurance.

Logano is currently under contract with Team Penske until the end of the 2023 season. He will return to the No. 22 Team Penske Ford Mustang for at least one more campaign, but the team has remained vocal about its plans for the keep much longer.

The Penske team has already solved the biggest hurdle that would disrupt a potential deal. The Cup Series organization has signed a massive extension with Equilon Enterprises LLC (d/b/a Shell Oil Products US) and Pennzoil-Quaker State Company, both of which are major sponsors of Logano.

Logano has multiple wins in 2022

Logano entered the 2022 season with at least one victory in 10 consecutive Cup Series seasons. He had 27 in total, and he was aiming to add more while securing a place in the Championship Four in another even-numbered season.

Logano did just that despite performing inconsistently. He first reached Victory Lane at Darlington Raceway after brushing off William Byron. This run punched his ticket to the playoffs.

Logano then won for the second time at World Wide Technology Raceway while conquering another new addition to the Cup Series schedule. This second victory assures him of being in the playoffs even if more than 16 drivers win in the regular season.

Logano is now seventh in the standings after the first 21 races of the 2022 season. He is well above the playoff boundary line and he has the opportunity to add more points to his total before the playoffs start. . He will also sign a contract at some point in the near future, which will keep him in the #22 Ford for a considerable time.

Logano is unlikely to gain a new teammate

Penske remains focused on getting his three playoff drivers, but he has more questions to answer. The team owner must have wondered if he would consider bringing Kyle Busch into the building.

The short answer is no. Penske explained that the team remained happy with the pilots in the building. He also mentioned that Team Penske provides support for Wood Brothers Racing and the #21 car. Although Penske hasn’t completely stopped the idea of ​​adding Busch. He said, “we’ll wait and see” in reference to the two-time champion’s contract situation.

“We really have four cars we’re involved in today,” Penske explained. “We support the Wood Brothers and obviously Harrison [Burton]. We’re full of riders and we’re happy with the guys we have there. They’re young and ready to go, and I think our sponsors are fully aligned with us.