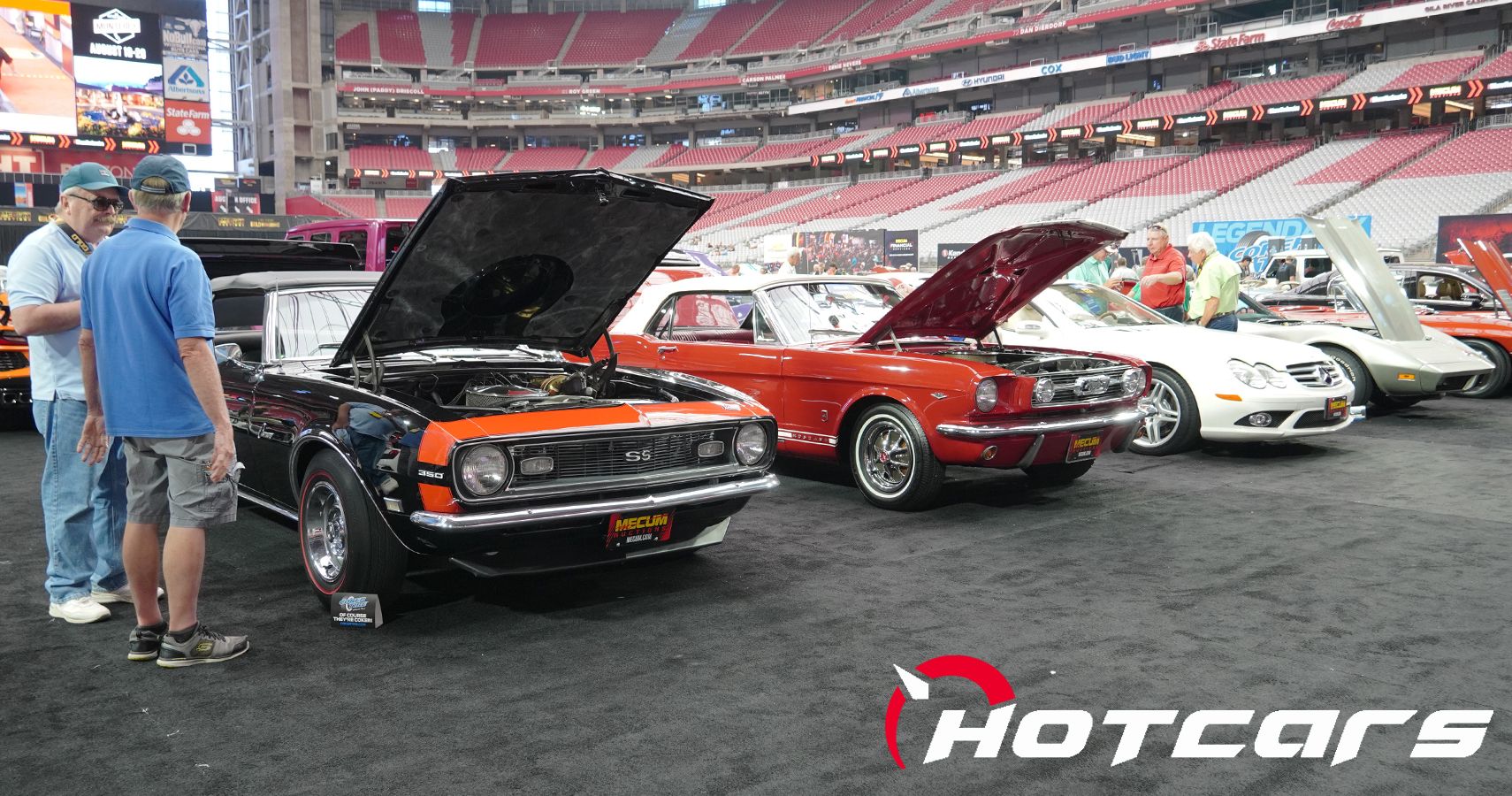 On a crystal clear Thursday in Arizona, I returned to State Farm Stadium just northwest of Phoenix for a second day covering Mecum’s 2022 Glendale Auction. Day 2 looked likely to double the action, as Mecum needed to pick up the pace if they really hoped to send all of the estimated 1,500 cars through the block over the course of four jam-packed days.

Mecum gave HotCars insider access on Wednesday, revealing all the hard work that goes into such a massive live auction, including checking cars as they come up, guaranteeing the details of the title like VINs and matching engines to numbers, and even setting up financing for winning bidders. For Thursday, I entered the event in hopes of checking out some of the most amazing cars up for auction, as well as seeing the Dodge Power Partyautocross lessons to test my skills behind the wheel of a 797 horsepower Charger or Challenger Redeye.

Although I arrived early to film some of the more valuable cars in peace, I found that even before 9am the auctioneers were ahead of me. Wednesday ended after just over 300 cars drove through the block, along with memorabilia and charity fundraisers, but the larger numbers lined up for Thursday meant an early start. As I filmed with a Plymouth Road Runner Superbird and a Dodge Charger Daytona, the batches started rolling at an accelerated pace.

Then I rushed outside to line up for the Dodge Power Party booth. Instead of riding for a drift experience, this time around I wanted to try autocross for only the second time in my life. As I climbed into a full-powered Charger Redeye – no black keys here – and headed for the start line, I tried to focus on all my learnings from nearby Radford Racing School earlier this year.

Sure enough, the Charger’s prodigious brake bite took me by surprise, and the supercharged Hellcat Hemi put enough power to the ground to cause a bit of wheel spin. I recorded 28.66 seconds on my first lap, but managed to save three seconds on that time in a Challenger – both because I had the chance to improve my technique with a knowledge of the conical course but also, I like to think, because I felt more comfortable in the Challenger since I drove a lot more at Radford.

Even for a professional, keeping track of all the little details that make a car special can seem difficult at an event as big as Mecum’s 2022 Glendale auction. One tidbit I took home to do some further research came when I noticed the borderline psychedelic Shaker logo on the hood above – in my mind, I thought Shaker hoods belonged in Mustangs, since it did Angel’s Garage do for their Mach 1 restoration. Or was it Dodges? Turns out the Hood Shaker simply refers to an intake that protrudes above the hood to force air to the engine, regardless of brand. But look at this Shaker font, which makes my eyes twitch!

These details add up when browsing around the range that Mecum gathers for live auctions. Even with more than 300 cars auctioned Wednesday, the show’s big stars were still waiting for potential bidders to inspect (and enthusiasts on hand for the show to enjoy). More cars, trucks, SUVs and even boats also arrived on time, but the best ones all carried signs saying they would be auctioned on Saturday.

Probably the most beautiful car in Mecum Glendale

Perhaps the most stunning car I saw in Glendale, a completely unique 1937 Ford Custom caught my eye at first glance. Owner Jerry Ruskin told an incredible story involving an original German Baron von Koeln who commissioned a custom body in Copenhagen in 1937. Eventually the car ended up hiding from the Nazis in a barn during WWII – Jerry has photos to prove provenance – before finally arriving in America, where a full restoration undertaken some twenty years ago cost over $800,000! This owner knew that no private sale could come close to recouping such an investment and donated the Ford to the Petersen automobile museum in Los Angeles. Ruskin, for his part, added a set of custom Budnik wheels and a few hundred miles throughout his ownership and even purposely fired up the 650-hp Ford SVO V8 under the hood for the HotCars camera.

Bidders can request a Quick Start

This ability to check cars up close makes attending a Mecum auction in person special – compared to online venues, even though cold start and driving videos have become the norm – and Mecum staff will happily fire up the engines for potential bidders to prove they are running well. Check out the video above for some of the best I’ve spotted.

But perhaps my biggest lesson of my time at Mecum came when I came across a section hosting Mecum’s “The Bid Goes On” programming outside of State Farm Stadium. Cars that fail to meet reserve their first time through the block can wait out the remainder of the auction while interested parties sift through the selection and potentially bid higher. Occasionally, auctioneers have even interrupted their feed to announce that a recent lot has been sold thanks to The Bid Goes On.

Some online auction sites may connect sellers with high bidders on unmet reserve cars, but Mecum’s in-person strategy seems to allow for a greater chance of a car finding a new owner – just one reason moreover why, even in the digital age, Mecum strongly believes that live auctions will remain a bedrock of automotive culture for the foreseeable future.

Michael Van Runkle grew up surrounded by the automotive culture of Los Angeles, traveling to small enthusiast get-togethers and huge industry shows. He learned to drive the shifter in a 1948 Chevy pickup with no first gear and currently uses his 1998 Mitsubishi Montero while dreaming of one day completing this Porsche 914 project. He has written in various media since he graduated from UC Berkeley in 2010 and started at HotCars in February 2018.