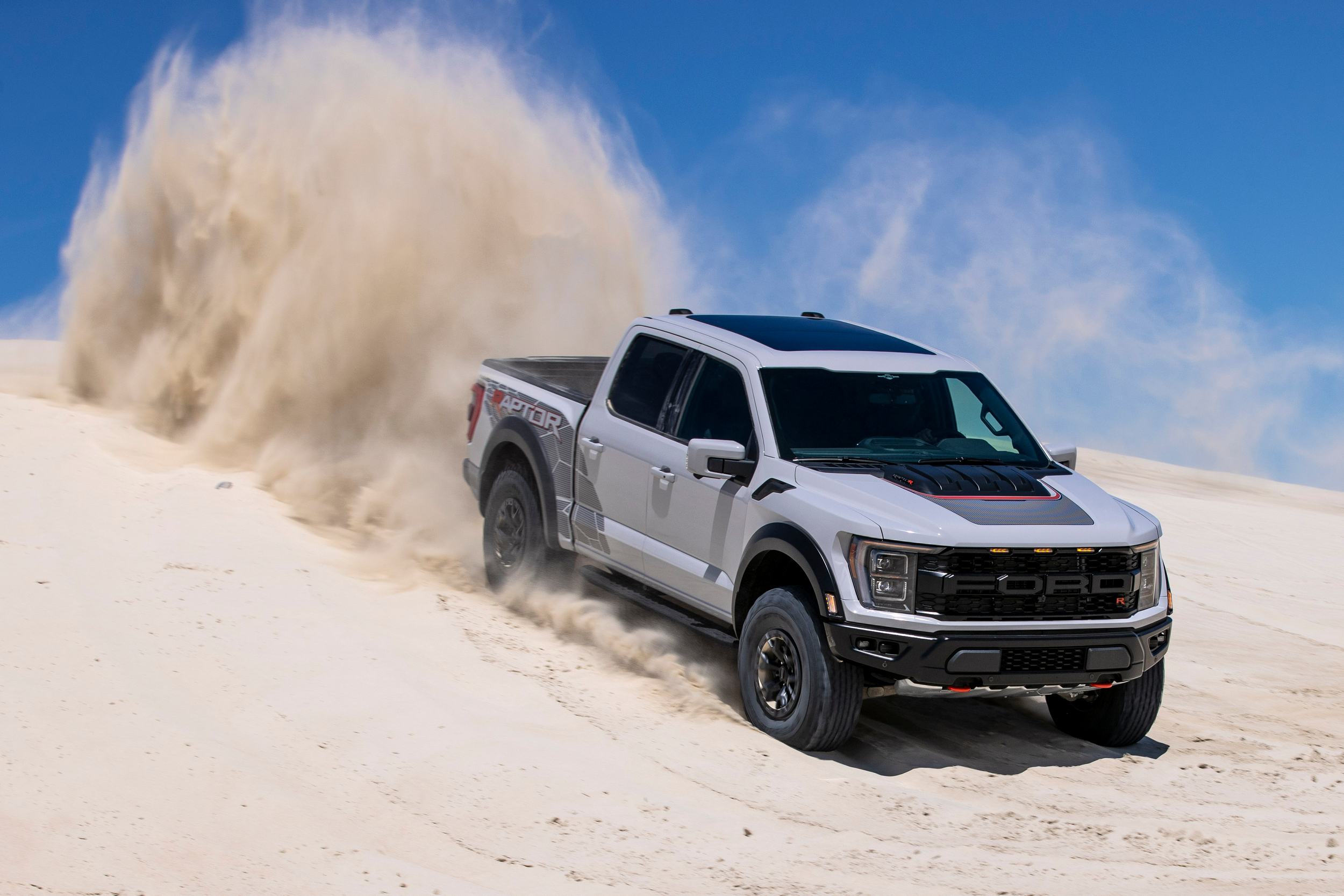 The V8 Ford F-150 Raptor is back! This time it’s a supercharged 5.2-litre beast borrowed from the Mustang Shelby GT500. With big power, 37-inch-tall tires and a beefed-up drivetrain, it’s only missing one thing – the three ponies it would need to outrun the TRX-RAM in the battle of the dino-trucks.

Ford has plenty to brag about with the F-150 Raptor R. This supercharged 5.2-liter V8 is no joke. It’s nearly the same as the Mustang Shelby GT500‘s engine, but Ford made a few truck-ready upgrades to make sure it’s durable when blasting over dunes and hauling trailers.

A recalibration of the fan and a new pulley are installed to give it more low-end torque. The changes increase total horsepower to 650 lb-ft, more than the Mustang’s 625. More low-end and mid-range torque makes it more suitable for crawling rock and the use of trucks than the Mustang first runway intentions.

To improve durability, Ford Performance added a cast stainless steel exhaust manifold. There’s also a special oil cooler and filter, and Ford added a deeper oil pan. The purpose of these parts is to keep the engine cool and to keep it lubricated when going up (or down) steep hills.

Ford even made the Raptor R breathe better. Thanks to a larger air intake and a higher flow filter that adds 66% more intake air volume.

Total power is 700 horsepower, just two less than the supercharged 6.2L RAM 1500 TRX. We can’t imagine how passionate the product and marketing meetings were about this small difference, but there’s no doubt that there was drama. Ford gets a claim, though, calling it “the most torque-dense supercharged V8 yet in a production pickup.”

The new V8 will roar through a new active-valve dual exhaust system. The system has a silent mode, as well as normal and sport modes. Then there’s Baja mode, the one that will let you quickly know which of your neighbors like loud V8s and which absolutely don’t.

While it’s ready to jump and crawl, the Ford F-150 Raptor R is also ready for truck duty. Payload is the same as the standard Raptor at 1,400 pounds, while towing increases by 500 pounds to a maximum of 8,700.

The second generation, launched in 2017, said goodbye to the V8 and instead used Ford’s 3.5-liter EcoBoost V6. It was a tweaked version that drew heavily on the Ford GT and produced 450 horsepower, but not everyone was thrilled with the change.

This is the third generation of the Raptor. Ford offers the standard Raptor with that same EcoBoost V6, but the Raptor R will be sold exclusively with that big blown V8.

All that torque, along with standard 37-inch-tall tires, means Ford had to make changes to the chassis as well. The Raptor R has a new front axle that gets a stronger carrier casting. There is a new aluminum ribbed cover for the differential and a larger diameter aluminum driveshaft.

Inside the 10-speed automatic, Ford Performance added a new torque converter with a heavy-duty turbine damper. There is also a new four-sprocket rear output assembly.

Its 24-inch-long coil springs give the truck 13 inches of front travel and 14.1 inches of rear travel. Fox Live Valve shocks provide near-constant damping adjustment. Plus, the five-link rear features extra-long trailing arms to keep the axle properly positioned when jumping off the pavement.

Besides the large graphics package on the rear chevron, Ford has limited cosmetic changes. Of course, the standard Raptor isn’t exactly subtle, so maybe that’s better?

A high-powered, bulging cowl gives the supercharger room to move. It is finished in black, as are the fender flares. Ford’s large R logo is orange, and there are more orange accents on the power dome and tailgate.

Inside, it has black leather and Alcantara, and Ford has added carbon fiber to the doors, media tray and part of the dashboard.

The 2021 Ford Raptor offers more of everything

The 2021 Ford F-150 Raptor is back for round three. Can it answer the huge gauntlet thrown by the new RAM TRX? Check out all the new updates here. Read more…