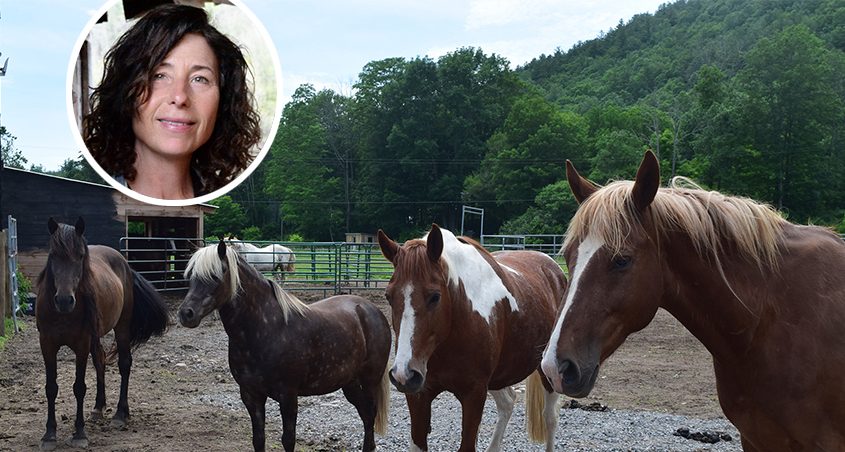 In Schoharie County, a home for wild mustangs

Mary DeBonis has been saving and softening wild mustangs for over 20 years.

Across the expansive acres of Mustang Valley Sanctuary, nestled among the rolling hills of West Fulton, Schoharie County, DeBonis is home to mustangs and other horses she has rescued over the years. She also offers equestrian therapy programs for veterans and survivors of domestic violence.

A few years ago it was a relatively small operation, with only a few stands. However, this year DeBonis built more because it took on more horses, in part due to an adoption incentive program launched by the federal government’s Bureau of Land Management (BLM) in 2019.

The goals of the program appear positive: to provide $ 1,000 to people who adopt a wild horse or burro from the BLM to reduce the costs incurred by the BLM in caring for unadopted and untrained animals.

Yet in practice, a New York Times investigation found that some adopters would take the money and send the horses to auction for slaughter.

“It’s the government that launders horses,” Brieanah Schwartz, lawyer for the American Wild Horse Campaign, told the New York Times. “They call it adoptions, knowing that the horses are going to be slaughtered. But that way the BLM won’t have its fingerprints on it.

Since 1971, the BLM has managed the wild horse and burros population through the Wild Free-Roaming Horses and Burros Act. Under it, the BLM is allowed to remove what it considers wild horses and excess burros from public land, most of which spans a dozen western states.

The agency estimates that as of March 2021, there were 86,189 wild mustangs and burros on public lands. Last year there were 95,114. In 2020, 10,824 of the animals were abducted, usually in helicopter roundups, which many activists and animal organizations deem inhumane. A total of 6,162 of the animals collected were placed in private care and 735 underwent fertility control treatments, according to the BLM. The removal, transportation and care of these animals cost $ 91.191 million in 2020.

As of May, about 51,000 mustangs that had not yet been adopted or sold had been placed in government pastures, corrals and private ranches, which the BLM rents, as the Times article reported. It costs taxpayers about $ 60 million a year.

From DeBonis’ perspective, the high price is just one of the many reasons why people in the Capital Region should pay attention.

“I just want to raise awareness. I feel like there are so many people I’m talking to. . . they have no idea, ”DeBonis said.

Since the adoption incentive program began, DeBonis, which was featured in the nationwide program called Extreme Mustang Makeover just a few years ago, has saved more horses at a time than ever before.

“We put this expansion in because I saved nine from the pen last year. So I had a total of 17 [horses] get through the winter and I didn’t have the stalls, ”DeBonis said.

She is part of a network of people concerned about wild mustangs and connect with savvy people to buy the horses at slaughter auctions and kill pens across the country and transport them to adoptees or sanctuaries like Mustang Valley. .

Most of the mustangs she saw in the killing pens shouldn’t be there in the first place, either because they were expected to be in long-term custody or were believed to have been adopted into the setting. from the program.

“I shouldn’t have to take my hard earned money and take horses out of the paddock while someone else is being paid for them, and basically that’s what I do. I’m working to support this, ”DeBonis said.

She works as an outsourced financial manager and to fund Mustang Rescues, she recently started offering campsites at Mustang Valley Sanctuary.

She also worked to fund the John E. Quinn Foundation, which helps veterans with post-traumatic stress disorder learn how to soften a mustang.

Among the mustangs she brought last year is Star, who had a frost mark on her coat indicating she is believed to be in long-term custody with a breeder.

“So the government thinks she is owned by a rancher and is paying a rancher for her and that she was in the slaughter pen,” DeBonis said.

DeBonis also rescued several other female Mustangs, including Rosita, Shakira, and Mikayla, who was pregnant at the time and has since given birth to a mischievous foal named Elena.

More often than not, there are other mustangs in need and DeBonis said she is just trying to trust her intuition to try to save them.

“I can’t believe I ended up with nine more horses last year, but I don’t regret it for a second,” said DeBonis.

Through natural riding, DeBonis made an effort to soften the mustangs she rescued so that they were comfortable with her by walking them and putting them on and taking them off. She also teaches them to trust humans.

Some of the horses she will adopt. However, she will only adopt a horse if she thinks it will be a good choice for the horse and the adoptee.

“There are people who want the horses and I say no because. . . I spent my hard earned money to get them out of the massacre. I’m not going to see them find themselves in this situation. So the deal with whoever takes an animal from me is always that I don’t sell it. . . There is no purchase price. You make a donation. And then I get them to accept that if they don’t want the animal anymore, it comes back to me, ”DeBonis said.

Lisa Zaccaglini and Mike Shuster of Sharon Springs are two recent adoptees. After meeting DeBonis and learning about the mustangs she saves, they decided to adopt two.

They adopted the aptly named Yoko and Lucy. The latter is gentle, like the iconic character in Lucille Ball, and the former tends to be more serious, like the famous artist and activist. Zaccaglini grew up taking care of horses, when Shuster didn’t have a lot of experience with them, so there was a bit of a learning curve, which DeBonis helped smooth out.

“Mary’s great because she’s like the horse hotline,” Shuster joked.

More recently, DeBonis has also focused on publicizing the popular and often-photographed Onaqui herd’s helicopter roundups in Utah, asking authorities to stop them.

“I think more people need to know what’s going on, they need to see where their tax dollars are going. I also want people to know that we have a wild horse sanctuary right here in the valley, ”DeBonis said.

More from The Daily Gazette: