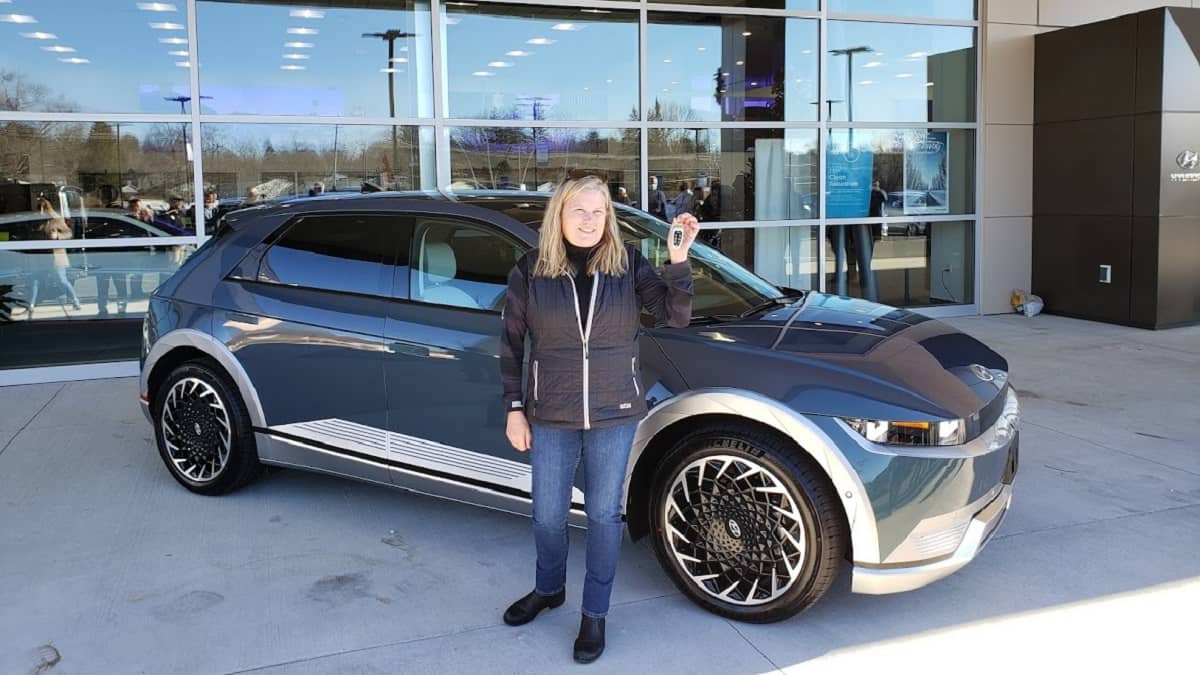 Hyundai begins deliveries of IONIQ 5 to the east coast

Hyundai’s third battery-electric vehicle has officially joined its fleet. Friday 17 at 1 p.m., the keys of the first East-Coast IONIQ 5 were handed over to Mrs. Sandra Bergland during an event held at Gary Rome Hyundai in Holyoke, Massachusetts (approximately ninety minutes west of Boston).

“As the captain of a large freight airline flying large cargo planes, I am immersed in the technology and how it has reshaped the industry. The IONIQ 5 is the perfect vehicle for me because I appreciate its progressive aerodynamic exterior design as well as a spacious and intelligent interior, innovative connectivity and advanced technologies; it is redefining the industry and opening up new choices for customers like me. After the wait, I’m thrilled to be among the first to drive the IONIQ 5 and embark on road trips that complement my active lifestyle without needing to stop at gas stations. said Bergland.

Unlike many brands, notably Tesla, which typically launch electric vehicles with the intention of selling them primarily in a single regional market (California) until delivery volume is reached, Hyundai is rolling out its IONIQ 5 on markets outside of California right off the bat. Holyoke is a town in what many call western Massachusetts, near the University of Massachusetts on the Amherst campus. It is about 30 miles from Hartford, CT, and closer to Vermont than to Boston.

The IONIQ 5 is a new all-electric model from Hyundai that will compete directly with the VW ID.4 and the Ford Mustang Mach-E. Its base price starts at around $ 41,000 and its top trim with all-wheel drive is priced at $ 55,725 before dealer market adjustments and the addition of aftermarket accessories. These prices are ahead of federal, state, or local incentives for electric vehicles, which currently represent a savings of about $ 10,000 for electric vehicle owners in Massachusetts.

The IONIQ 5 is not in direct competition with the Tesla Model Y. The Model Y is significantly more expensive. The cheapest Model Y is priced at $ 60,440. So the top trim of the IONIQ 5 costs around $ 5,000. Comparably equipped, the IONIQ 5 will cost consumers about half of what a Tesla Model Y will cost.

Gary Rome Hyundai hosted members of the New England Automotive Press Association as well as other local mainstream media. In addition to the Limited version in which Mrs Begland returns home, a second IONIQ 5 from the dealer’s inventory has been made available for rides and trips. A Gary Rome Hyundai spokesperson told us that there are now five more IONIQ 5s heading to the dealership for inventory.

Our handling and driving have convinced us that the IONIQ 5 may well become a leader in its segment. It will almost entirely depend on how many Hyundai can produce. There are only two battery electric vehicles on the US market that have been able to demonstrate a delivery volume of over 3,000 units per month. By comparison, a Toyota RAV4 can often sell for 15 times that volume.

Although the IONIQ 5 was the main attraction, we took the time to walk around the dealership’s premises before joining the event group. We asked questions of the employees, who were all happy to help us. We were shown the build area where the dealership is installing Level 3 chargers for the Kona Electric and IONIQ electric models that the brand sells, as well as the brand’s plug-in hybrid models. Hyundai has so many electrified models that it’s hard to count them now. No other automaker has more eco-friendly models in production today other than Toyota. One floor model on sale for immediate delivery that caught our eye was a new Elantra Hybrid. Gary Rome Hyundai had dozens of new and unsold vehicles on the lot and nearly 100 used vehicles for immediate delivery. A salesperson told us that orders for vehicles that are not in the field typically take about one to three weeks for post-order delivery. None of the new vehicles we saw on display had market tweaks added to their Monroney sticker prices.

Our Ride and Drive host, Kevin Covington is a salesperson with approximately five years of dealership service. Kevin is what we would call an EV expert, with whom we have found it easy to discuss topics related to living electricity. For example, Kevin was comfortable explaining the load profile of the IONIQ 5 and comparing and contrasting it with some of his peers in the market. A second employee we spoke with was equally well versed in the EV language and had a full understanding of the new technology offered by the IONIQ 5 and the other BEV and PHEV models sold by Hyundai today.

Watch for our first driving impressions and other Hyundai IONIQ 5 covers this coming week.

Image of the Hyundai IONIQ 5 with new owner by John Goreham.

John goreham it’s been a long time New England Automotive Press Association member and recovery engineer. John’s interest in electric vehicles dates back to 1990 when he designed the thermal control system for an electric vehicle battery as part of a college team. After graduating in Mechanical Engineering, John completed a marketing program at Northeastern University and worked with manufacturers of automotive components, in the semiconductor industry, and in biotechnology. In addition to Torque News, John’s work has been featured in dozens of US media outlets and he provides reviews for numerous vehicle shopping sites. You can follow John on TikTok @ToknCars, to Twitter, and view his credentials on Linkedin