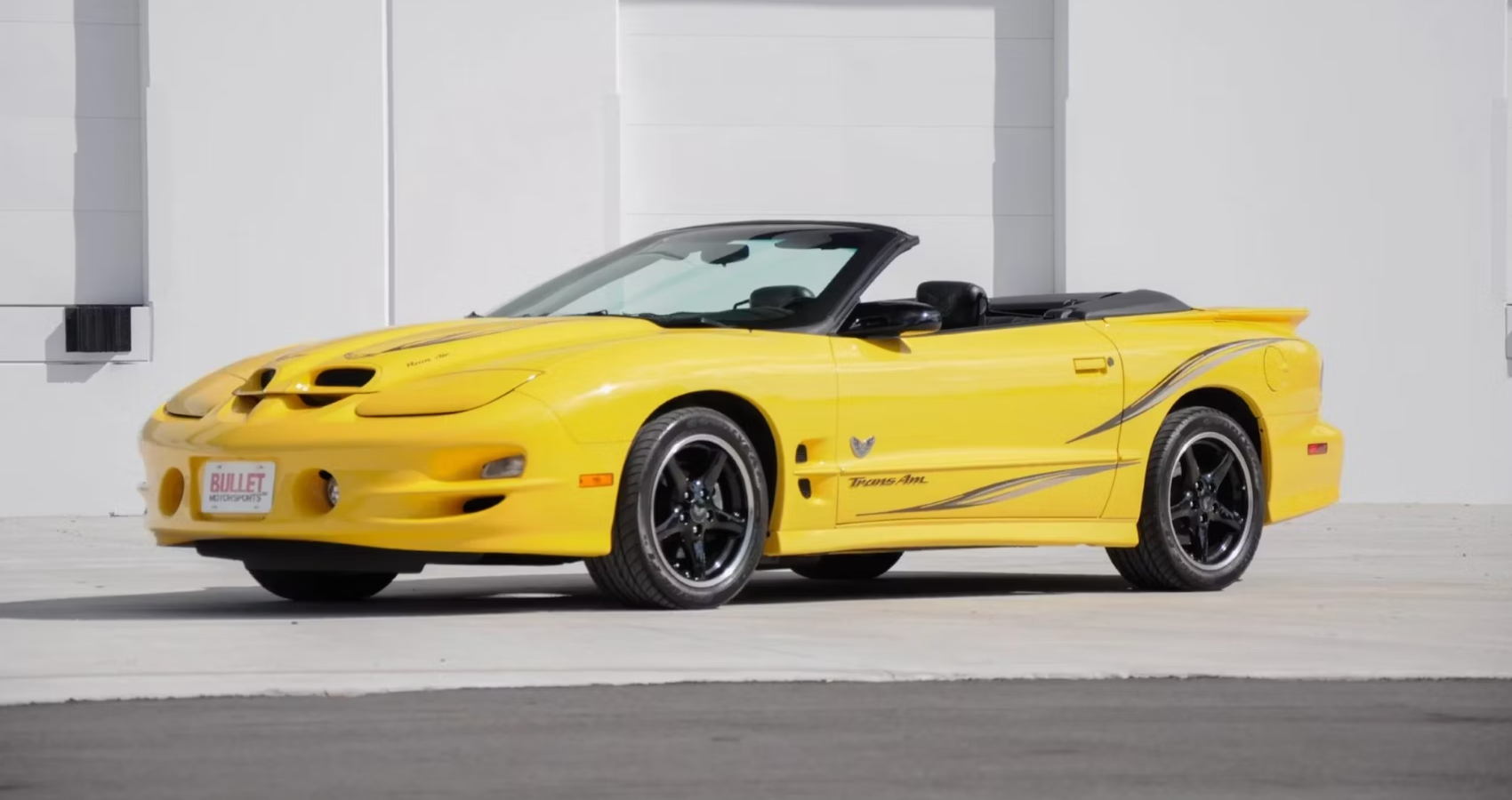 Pontiac was an American automobile brand owned, manufactured and marketed by General Motors. The brand produced the Firebird for nearly four decades, from 1967 to 2002. Sharing the Chevy Camaro platform, which the parent company introduced just five months earlier, the Firebird was designed as a pony car to take on the Ford Mustang. Nevertheless, the 1967 Firebird should not be confused with the GM concept cars of the same name from the 1950s and early 1960s.

It was designed from the ground up to reflect its motorsport heritage and featured distinctive elements such as a special paint scheme, detailed interior appointments, special edition badging and the Trans Performance and Handling Package. -Am WS6. The company produced around 2,400 units of the acclaimed Firebird Collector’s Edition, with around 500 convertibles and around sixty percent of the entire lineup getting the glorious 6-speed manual transmission.

Related: A Detailed Look At The Pontiac Turbo Trans Am

The 2002 Pontiac Firebird Trans-Am Collector’s Edition was not the first of these anniversary Firebirds introduced by Pontiac. During its fourth generation, the marquee featured the 25th anniversary of the Firebird Trans-Am in 1994. It arrived in white with a single dark blue stripe down the center in a clear homage to the 1970 Trans Am.

The white/dark blue livery was accented by white 16-inch 5-spoke alloy wheels, and white leather seats and door trim. The car could be available both as a coupe and a convertible.

These were in addition to two other special edition Firebirds that Pontiac introduced during this 4th generation period. They include the extra-performance special-edition Firehawk and the 1994 Trans-Am GT. The Firehawk was available in Formula trim from 1993 through 1997, and in Formula and Trans-Am trim from 1999 through 2002. They were built by SLP Engineering, Inc. and sold through Pontiac dealers.

The 1994 Firebird Trans-Am GT was only available that year and did not come with any special badging, graphics or emblems to immediately announce its “special” status. Consequently, it looked outwardly identical to the base Trans-Am cars, but varied wildly in performance.

Additionally, the 4th generation Firebird, which began production in 1993 and ended in 2002, took the aerodynamic styling of previous generations one step further, even though the rear axle and floorboards ‘back of the front seats have been largely taken over. Even so, 90% of 4th Gen Firebird parts were brand new.

Related: Here’s What Need For Speed ​​Mustang Is Worth Today

In 2000 Pontiac added the WS6 performance package (including higher rate springs, specific shocks with final drive ratio, larger stabilizer bars, plus 8-inch-wide wheels and larger tires) as an option exclusive to the Trans-Am coupe and convertible variants for the 2001 model year. For the 2002 model year, the Firebird received additional convenience items such as power mirrors and a power antenna as standard, while others like cassette stereos have been phased out.

The 35th Anniversary Firebird Trans-Am Collector’s Edition, released in 2002, was developed on the high-powered WS6 model and offered with a Trans-Am coupe (with a hatchback roof and black roof halo) as well as a convertible black roof. The standard WS6 package is the best feature of the Trans-Am Collector’s Edition and was a major contributor to the model’s instant celebrity status. Goodyear Eagle F1 performance tires are part of the WS6 package and therefore come as standard.

The performance package elevated the Firebird’s powertrain to a 5.7-liter LS1 V8 producing 325 horsepower and 350 lb-ft of torque. The engine was paired with either a 4-speed automatic transmission or a 6-speed manual transmission. Combined with the limited production volume, the model had “collector’s specs” written all over it upon release.

It arrived with an eye-catching paint job aptly dubbed the Pontiac Collector Yellow. This time, the iconic dark blue Firebird Trans-Am stripe that typically runs down the center of the car is reinterpreted as a double black racing stripe on the hood that has gradually wrapped around the car’s doors and quarter panels. . The Firebird Trans-Am tradition continued via the black 5-spoke wheels, complete with the archetypal Screaming Chicken decals and badging.

Along with the 12-disc CD changer (replacing the stereo), interior updates also include a vintage Passport radar detector. The rear of the car also received the “Special” treatment via two-tone Collector Yellow and black detailing.

A special issue from the Collector’s Edition owner’s portfolio concluded the finishing touches inside the vehicle. In 2002, the Firebird bid farewell in perfect style.

The Best Drag Shows in Dallas