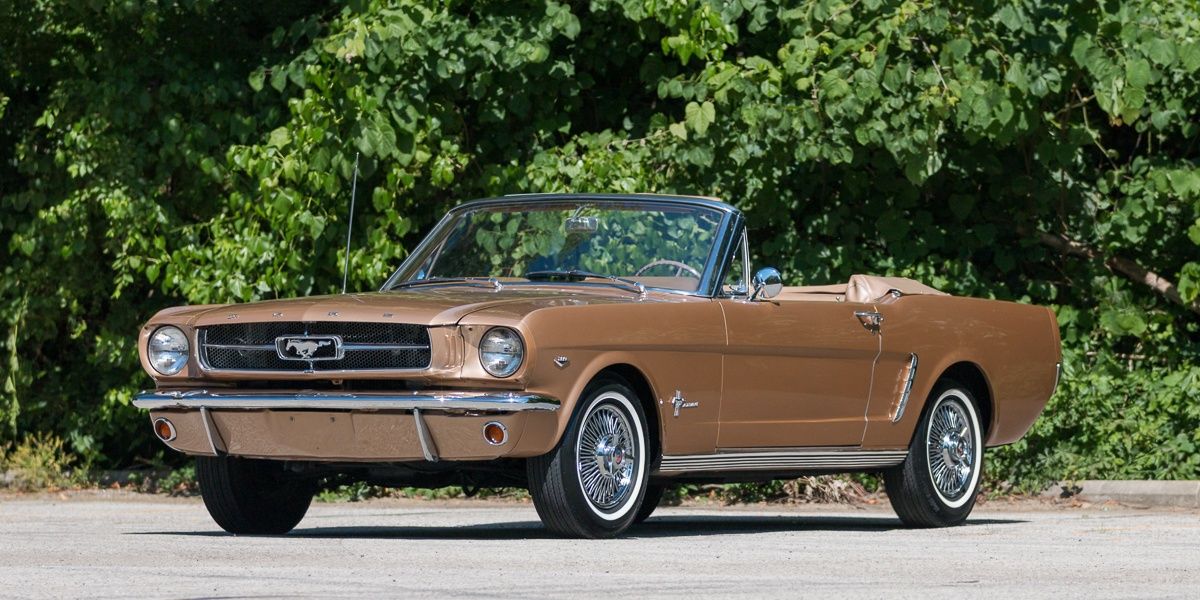 One of the most interesting entries in the canon of Ford Mustang, the 1964 1/2 model was the car that laid the foundation for the Mustang legacy. The final market adaptation of the original Mustang concept car and sold as a 1965 model, at first the car broke sales records, making Mustangs one of the most popular nameplates in history. the United States.

Related: Here’s What Mustang Owners Will Never Tell You

The 1964 1/2 Mustang is also an example of how product placement can really benefit the automotive industry, and how even the highest echelons of a company can make bad predictions. That’s all people keep forgetting about the car that first embodied pony cars.

The Mustang in its semi-final form was first introduced in mid-1964 as a 1965 model. Around August of the same year, modifications were made to the Mustang, but it was still marketed as a 1965 model. Eventually, the differences between the two model types would be differentiated as the 1964 1/2 and the 1965.

The main differences between the 1964 1/2 and the 1965 were the 1964’s reinforcement skirts which were removed for the 1965 as well as the modified headlights. The differences are subtle but still significant.

7 They were built on a Ford Falcon platform

Before the Mustang, Ford was riding high with the Ford Falcon, a top-selling sedan and one of the company’s most popular and important cars.

Although discontinued in 1970, the Ford Falcon platform was used as the platform for the original Mustangs. The car was also a base for several Ford vans, oddly enough.

Related: Here’s What Everyone Forgot About The Ford Falcon

6 They have been featured in 2 James Bond films

As mentioned earlier, much of the car’s success can be attributed to the power of product placement. In the James Bond movie golden finger, Bond is chased in his iconic Aston Martin by Bond Girl Tilly Masterson in a 1964 1/2 Mustang. The film was released just as the Mustang had been introduced to the market, and sales of the car quickly skyrocketed after the film’s release.

The car can also be found in another James Bond film, thunder ball, when driven by Bond girl Fiona Volpe on her way to meet the film’s villain, Emilio Largo. The film also features James Bond’s iconic Aston Martin in a Mustang chase scene.

5 Convertibles had a slightly more powerful engine than hardtops

Differences between Mustang engines tend to be subtle, especially in early model years. Originally built with a 200 cu. ft. six-cylinder block, later models would transition to V8 engines, which are now synonymous with the Mustang nameplate.

For some reason, however, the 1964 1/2 convertible options had a slightly more powerful engine than their hardtop siblings. Low-end models used a 170 cubic inch block, not a 200. V8 models were labeled with emblems on the front fender.

Ford was proud of the Mustang, but expectations for the car’s performance in the market were initially low, which might explain why the company allowed the cars to appear in Bond films.

If that was the strategy, it worked. Mustangs were originally ordered to be around 10,000 units, sales were so high that hundreds of thousands of models were sold in their first months on the market. As mentioned earlier, Mustang sales skyrocketed after the film’s release. golden finger, where the car featured prominently.

Related: These Are The 10 Most Iconic Cars In The James Bond Franchise

3 They weren’t available as Fastbacks

It’s not the most interesting fact, of course, but it’s still important to note in order to fully understand the car’s effect on the history of the automobile. It also gives people insight into market demand at the time the Mustang was first produced, which can lead to other important automotive history information.

Anyway, the 1964 Mustang was only available as a coupe or convertible. Only late 1965 models were also available as fastbacks.

2 They were named after a World War II fighter plane

There is a degree of speculation as to how the Mustang got its name, but one fact we do know is that the cars were designed by Ford Stylist John Naijar who had a deep fascination with airplanes, especially WWII fighters.

Apparently Naijar named the vehicle after the P-51 Mustang which was a common fighter aircraft during the war.

Related: These are the 10 fastest fighter jets of all time

1 This is not the first pony car

It is true that the Mustang is the epitome of the pony car and has helped create a new classification of vehicles by performing so strongly in the market. However, despite what some online car forums might have you believe, they aren’t technically the first car to use big-block engines in a more compact body.

America’s first true Pony car was the Plymouth Barracuda. The car had many of the same or similar specifications as the Mustang, and luckily the Barracuda was introduced just two weeks before the Mustangs. If Ford had introduced the Mustang earlier, they would hold the title. Alas, they don’t.

8 Reasons You Should Own a Fox Body Mustang

James J. Jackson is a writer with words in TheThings, Sacramento News and Review, Ariel Chart Journal, and more. Like many contraptions, he grew up holding his mechanic dad’s flashlight.