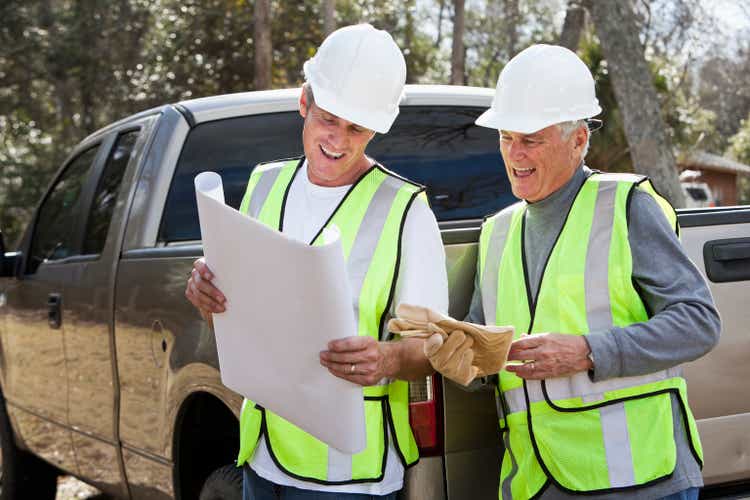 Two members of my C-12 CEO’s board run relatively large companies in the construction industry, each with a fleet of over 50 trucks. Another has franchises in Two men and a truck. Over the past two years, I’ve learned what they think of their trucks, how they’re used, and the costs involved. If their views are representative of the industry, and I believe they are, it will have big implications for the adoption of electric work trucks over the next five years.

For a fleet of 2 million trucks/year, this equates to the annual creation of $30 billion in savings, at the expense of oil and gas companies and the automotive service industry. Also, something not considered here is the current increased value retention for electric vehicles and the likely deterioration in resale value of ICE vehicles later in the decade.

The fleet owner’s point of view

In rough numbers, a plumber, HVAC, electrician, roofer, or other business with a fleet of 50 trucks can expect to generate $30,000 in business with each truck, each month. Multiplying that, that’s $18 million in annual revenue. A reasonable margin for these companies might be 5%, or $900,000 in annual profit. From their point of view, the advantages of an electric fleet are:

There are very few trade-offs and the upside potential is very significant. These companies carefully examine the expenses associated with their fleets and try to reduce them in any way possible. The potential to augment this with solar power and batteries is also a consideration.

The opportunity for General Motors, Ford and Rivian

Compared to a brand like Tesla, General Motors and Ford stumbled early in the EV race, both in terms of the speed to market and the quality of their vehicles. Ford’s first electric vehicle, the Focus, with a range of around 100 miles and a 0-60 time of 11 seconds, couldn’t compete with Tesla’s Model S, and ultimately sold just 1,115 vehicles/year. The Mustang Mach-E, which came out ten years later, sold 27,000 vehicles last year, more than the entire Focus Electric. But that was 10 years too late, and sold about 1/30th of the Tesla lineup. The Ford F-150 Lightning is a solid offering and will have the 2nd engine advantage, behind only Rivian.

General Motors got off to a better start, with the Chevrolet Volt and later the all-electric Chevrolet Bolt. However, the Volt was pulled from the market and soon after the Bolt was recalled due to spontaneous battery fires, costing General Motors and their partners $1.8 billion, or about $12,700 per year. vehicle sold. In Q4 2021, combined sales of the Bolt and Hummer totaled just 26 EVs. Rivian delivered over 1,000, almost all of them in Q4. But the new electric Silverado will be a real contender, rivaling the F-150 lightning and Rivian.

The conservative construction and service industry is unlikely to accept the form and appearance of the Tesla CyberTruck, and Tesla has also announced that it won’t start delivering until 2023. So the race is on and Ford , General Motors and Rivian can enter a segment and establish their brands without the competition they will have in Tesla’s sedans and SUVs.

Here’s what we love about the 1957 Ford Ranchero