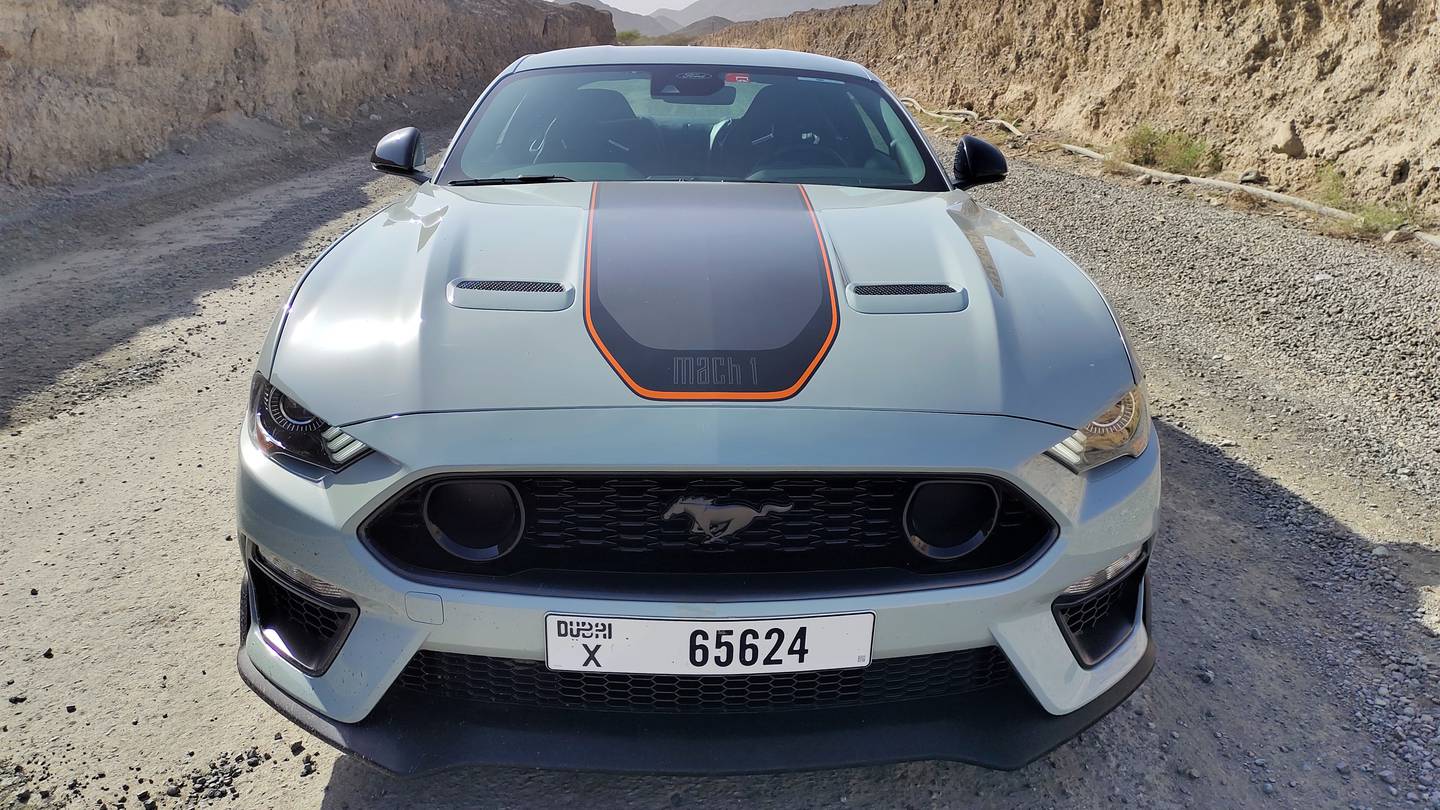 Speeding through gravel-covered mountain roads surrounded by jagged rock, the Ford Mustang Mach 1 metaphorically broke the sound barrier. The furious bark of the 5.0-liter V8 echoed off the surrounding dirt walls as clouds of dust rose in the wake of the shark-nosed coupe. Surely Henry Ford must be smiling.

Designed as a transitional model between the standard 5.0-liter GT and hardcore Shelby models, the limited-edition Mach 1 is the latest Mustang variant to hit Ford showrooms, picking up an evocative suffix that appeared for the first time on a Mustang in 1969. In case you hadn’t guessed, the nickname is a tribute to Chuck Yeager, the Air Force ace who broke the sound barrier (Mach 1 or 1,225 kilometers per hour) in 1947.

Ford touts the Mach 1 as the “most track-capable 5.0-liter Mustang ever,” thanks to a series of aerodynamic upgrades, beefed-up suspension and a slightly upgraded powertrain.

Although powered by essentially the same 5.0-liter V8 as the GT, a new intake manifold allows the engine to breathe better and develop 480 horsepower (20 horsepower more than the GT). The Mach 1 also features a more efficient cooling system, using components borrowed from the Shelby GT350.

A six-speed manual with short-throw shifter is the standard transmission in the Mustang Mach 1’s home market, but in our clutch-opposed region the default choice is a 10-speed automatic.

The Mach 1 recipe also includes an aero upgrade package that is said to increase downforce by 22%.

This all sounds pretty good on paper, but the litmus test would be provided by pitting the Mach 1 against the winding roads winding through the Hatta Mountains. It’s immediately apparent that the limited-edition ‘Stang is a tighter package than the standard GT.

There’s a bit of body roll to contend with, but get past that and you’ll find the Mach 1’s low-profile Michelin Pilot Sport 4 S rubber clings to tarmac with good tenacity. The brakes could be better though, as they are a little spongy and lack bite.

Without a doubt, the juiciest part of the Mustang is that intoxicating 5.0-liter V8. You’ll find yourself looking for tunnels, just so you can jump through them with the windows down. The V8 is not only loud, but also quite powerful, propelling the Mach 1 from 0 to 100 km/h in 4.4 seconds, and up to a top speed of 267 km/h.

The icing on the cake is the 10-speed automatic transmission, which quickly shifts to the highest possible gear in pursuit of fuel economy. Unfortunately, the transmission is also slow to respond when you flatten the throttle, seemingly confused as to which gear it should drop into. The Mach 1 would be a much nicer car with the six-speed manual, so it’s a shame that the latter setup is a rarity in our region.

In the look department

Visually, the Mach 1 hits the mark, and The NationalThe Jet Fighter Gray test car drew its fair share of appreciative glances from onlookers. Apart from the tasty five-spoke wheels, the limited-edition model is distinguished from other Stangs by satin black stripes on the bonnet and flanks with reflective highlights in red, white or orange.

Inside, there are leather sport seats with gunmetal gray stitching, and each Mustang Mach 1 features a dash badge with a Mach 1 logo and the car’s individual build number. Standard comfort and convenience technologies include heated and cooled front seats, SYNC 3 connectivity and a premium 12-speaker B&O audio system.

There’s a lot to love about the Mustang Mach 1, but its Dh306,000 price tag puts it up against the super-performance Porsche Cayman GTS 4.0 and BMW Z4 M40i. The Germans are undoubtedly sportier, but the Mustang Mach 1 offers its own brand of raucous Yankee charisma.

Do you need to go to Massachusetts RMV? Go now