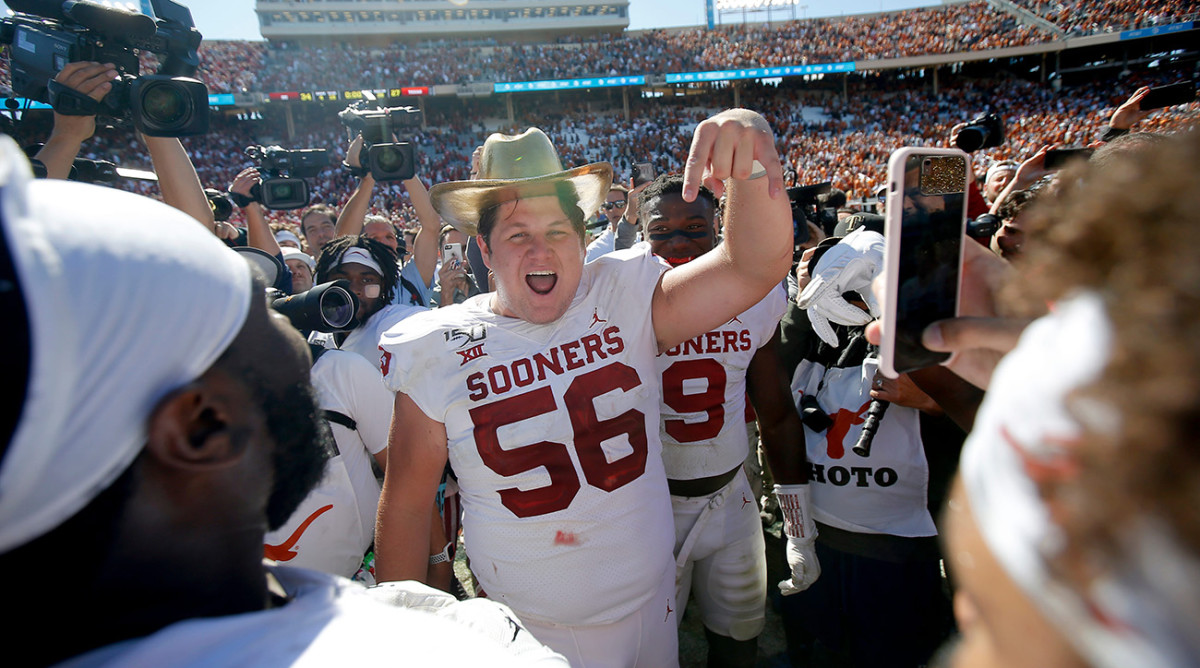 Forty names, games, teams and minutiae make the news in college football, where we all expect Game of the Century on Saturday between Connecticut and Massachusetts. Someone will win for the first time since 2019:

MORE DASH: Playoff debates | Love on the rocks | Undefeated on the outside

After SMU defeated rival TCU in Fort Worth on September 25, the post-game celebration turned sizzling when Mustangs wide receiver Rashee Rice passed a SMU flag through midfield. It prompted the usual shoves and antics, but SMU defensive back Brandon Crossley returned with the flag and planted it over the TCU logo. This led to the TCU players snatching the flag from the post, after which the flag was returned to an SMU player.

Given what followed, one would have thought that one side or the other had set the rival’s campus on fire. There was fury from Horned Frogs coach Gary Patterson, who has a history of question the class of opponents who beat their team. In this case, Patterson said the SMU flag factory was planned in advance and TCU assistant Jerry Kill, who has epilepsy, was knocked down and suffered a concussion in the crash. , although Kill was run over by a horned frog. “He was pushed down by our kids once on the movie in the middle of it, and he was touched, because I have the evidence to show it,” Patterson said. “… In the end, that wouldn’t have happened if we hadn’t had the flag situation.

SMU athletic director Rick Hart responded at length. Among his comments: “This activity was spontaneous and emotional. To suggest otherwise is irresponsible and offensive. I will not allow Coach (Sonny) Dykes, our program or our student-athletes to be unduly attacked. Sonny is a formidable leader. And a man of great integrity. “

Certainly not the Iwo Jima Marines in terms of memorable flag plantings, but in Texan football it was enough to get the emotions going. Thus, another great chapter is added to the college football class war, where feelings are more easily hurt than it seems logical. To that end, here is a brief Dash collection of famous provocative moments before, during or after matches:

Hostile law in the midfield (32). From SMU last month to Baker Mayfield in the Horseshoe in 2017 and certainly long before that, the celebratory flag factory after a road win will always ignite the home team. But there are other methods as well, like Devin Bush of Michigan who scuffed Michigan State’s Spartan logo with his 18 studs after a brief dusting with some of the state’s players.

If the visiting team rallies in any way on or near the midfielder’s logo, the home team is very likely to view it as an invasion with the intention of insulting. And since the midfielder is also where the toss occurs, on rare occasions one team will refuse to shake hands with the other, as Maryland did at Penn State in 2014.

The convertible with the loot from the trophy games (33). In Dallas on Saturday, players on the winning team will pose for photos wearing this brass cowboy hat. The winning Minnesota-Wisconsin team will go wild with an ax afterwards. A pig statue will stand aloft like a golden idol at the end of Minnesota-Iowa. The sillier or more mysterious the trophy, the more likely it will be used as a prop to taunt the losing team.

Lighting Festive Tobacco Products (34). When Alabama wins in Knoxville – which has been all the time since 2004 – cigars will be smoked in the visitor’s locker rooms in a tradition that dates back to Bear Bryant. Auburn did better in 1999 after upsetting LSU in Death Valley, smoking stogies in the field afterward. In what has been called the cigar curse, Auburn lost on his next 10 trips to Baton Rouge before reversing the curse last Saturday.

The exit / entry confrontation (35). Coaches got better at defusing pre-game skirmishes, but at the time, there wasn’t much to stop Miami and Notre Dame from a heated brawl outside the tunnel as the two teams had to use ahead of the epic 1988 game. The Hurricanes went through Notre Dame’s pre-game warm-ups on their way back to the locker room, and by the time they reached the tunnel it was full. According to reports, the Notre Dame players acquired a helmet from Miami (somehow) during the scrum and never returned it.

The mockery of the hand signs (36). Florida State players will deride the Gator Chomp if they beat Florida. Alligators will deride the Seminole Chop if they beat FSU. And, stop The Dash if you’ve heard that before, some opposing players are known to turn Horns Down against Texas. If Oklahoma defeats the Longhorns on Saturday, protect children’s eyes so they don’t see that traumatic image on the TV screen.

Land acquisition (37). The state of Florida has its famous Sod Cemetery, where it inters pieces of grass from the high road wins. (The graveyard hasn’t had many new additions in a while.) Of course, if you don’t like a team of visitors digging up your turf, salvage is always an option. A year after the Seminoles left Clemson in 1988 with a win and Death Valley weed, the Tigers removed part of it from Doak Campbell Stadium after a win and buried it under a gravestone near from his training ground.

COACH WHO WON HIS COMP CAR THIS WEEK

Luc Fickell (38), Cincinnati. Into the mic, Fickell’s Bearcats beating Notre Dame were both expected and predicted in that same column. But in the macro, whoa. Power 5’s eternal underdog Cincinnati entered Notre Dame Stadium and ended a 26-game winning streak at home for the Fighting Irish. And now, 4-0 at Cincinnati, with back-to-back road wins over the Power 5 competition, has a legitimate chance of snagging a groundbreaking college football playoff bid. It’s time to take a step back and appreciate Fickell’s work in elevating a consistently good program to a legitimate powerhouse. Good job.

COACH WHO SHOULD TAKE THE BUS TO WORK

Andy Avalos (39), State of Boise. After being beaten at home by Nevada, this is the first time in 20 years that the Broncos have a five-game loss record in the season. The comfort for Avalos, a rookie head coach, is that the last time this happened was the first year on the job for a guy named Dan Hawkins, who only got 36-3 over the course of its next three seasons. Time will tell if the previous one is on Avalos’ side, but for now he faces a diminished talent left by Bryan Harsin.

When you’re thirsty in Chicago and looking for soccer – and sumo wrestling! – on television, The Dash recommends stopping at Clark Street Ale House (40). One Saturday night in late September, The Dash was stunned and amused to see all of the sumo wrestling group’s televisions after midnight, much to the delight of most patrons in the area. (Who knew there was a sumo bar in Chicago?) Once the matches were over, they quickly returned to the # Pac12AfterDark lineup. Check it out, order a Hop Prism Blue IPA from Noon Whistle Brewing, and thank The Dash later.

MORE DASH: Playoff debates | Love on the rocks | Undefeated on the outside

Illustrated sports may receive compensation for certain links to products and services on this website.