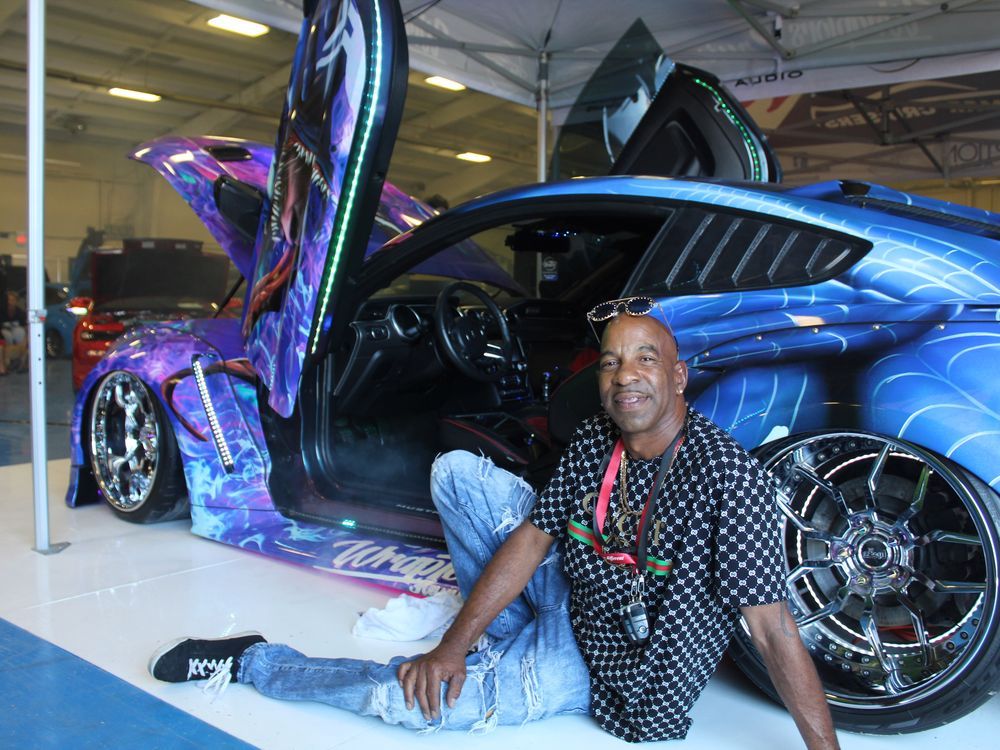 The Aud was crowded on weekends with vehicles limited only by their owner’s imagination.

But a wildly customized car was creating heavy traffic in the fair building.

Mark Creese’s 2018 Ford Venom Mustang is truly a car like no other. The 870-horsepower blue-purple beauty has tweaked everything: drivetrain, brakes, chassis and suspension, and a supercharged whipple — an engine component that helps it produce more power. It has under-light lighting and lights in the wheels and scissor doors. The car’s custom audio entertainment system consumes the entire trunk.

His custom wrap features Venom, the superhero from the 2018 Marvel Comics movie. But there’s a twist: Venom’s head – pictured in multiple places on the car – is half the superhero and half Venom’s own face. Creese.

A machine under the vehicle was blowing vaporized distilled water, making the engine look like it was smoking.

But Creese’s favorite modification is what’s called a “dropped widebody kit,” which he says makes it the widest Venom Mustang in Canada.

Creese, who operates Wraptors Hamilton, which specializes in chrome car wraps, takes the Venom Mustang to shows nationwide and to local fundraising events.

“I’ve loved cars since I was five and handed tools to my dad,” Creese said. “I bought my first car at 15, a Camaro. I like to take something ugly and make it beautiful.

The weekend marked the 13e Annual Summer Showdown Car Show, started by Simcoe resident Kristine Hill. His love for modifying cars took off when he was 21 and started customizing his 2003 Pontiac.

Hill and a friend started the Ontario Pontiac Club Birthday Bash (which became the Summer Showdown Car Show) which was first held at The Aud in 2008.

Now open to all makes and models, the show attracts cars and owners from Ottawa to Windsor.

“You customize it to suit your personality and your needs,” Hill said. “Some people do it for the performance and go to the tracks. Some participate in audio competitions.

Hill said car customization can easily go from hobby to expensive passion, with some owners investing tens of thousands of dollars in their dream vehicles.

“It’s a project that never ends,” said Nickolas Gillis of Peterborough who took his 2001 Nissan Sentra SR to the Simcoe show.

At 21, Gillis has just gotten into car customization after being introduced to it through video games like Need for Speed.

Gillis said he learned more about his hobby by going to weekend shows and talking to more experienced car owners.