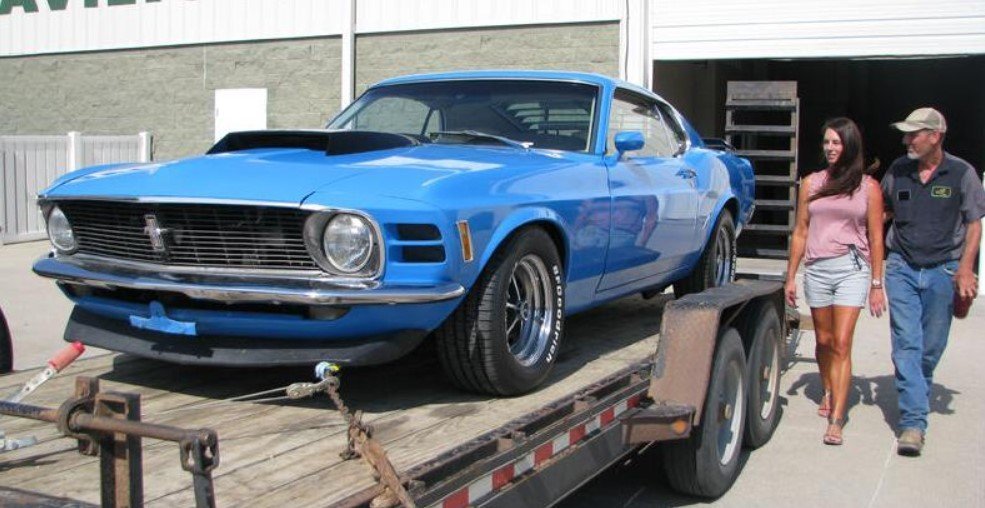 KEARNEY, Kansas (Kearney Hub) – The bright blue Ford Mustang on LeRoy Johnson’s trailer has been gathering dust in a shed near Sumner for nearly 50 years.

Thursday afternoon, as Johnson and his wife, Amy, of Nelson prepared to drive away from the Buffalo County Fairgrounds, they were ready to blow off the rest of the dust.

The Johnsons had just purchased the 1970 Mustang 429 Boss.

At $442,000, the Mustang was the top seller at an auction that included 17 rare and powerful cars from Sumner’s late “Butch” Siebenaler collection. He had spent his life hunting down rare cars and the parts to rebuild them, but he died of a heart attack last year and so the best of his collection was put up for sale by Big Iron Auctions.

The online auction has attracted worldwide interest and was due to end at 1 p.m. Thursday. However, the bidding was extended and the Johnsons waited long enough to get LeRoy’s dream car. “I’m a big crew chief and it’s a pretty unique car. I’m going to put it on the highway and see what it does,” LeRoy said.

One of the rarest and most collectible muscle cars, the Grabber Blue Mustang’s 429 cubic inch engine produces 1,100 horsepower and it’s one of only 1,356 ever built.

Amy said she was shaking with nervousness until she and LeRoy finally won the bidding contest.

The Mustang was among 17 cars auctioned Thursday. Big Iron’s Mat Cope declined to reveal how much the auction brought in, but said it was successful and there would be another auction of Siebenaler’s collection in late September.

There are still 186 cars and many parts stored in the Siebenaler salvage yard near Sumner.

Big Iron, which is experienced in selling heavy equipment and farm implements, had its first experience with vintage cars two years ago when it auctioned off the Chevyland USA vehicles and building near ‘Elm Creek. The Chevyland building now houses a commercial sign company.

Cope said after Thursday’s muscle car sale that he had the distinction of having sold a rare and sought-after vehicle. “I sold a car for $442,000. I have a bit of ‘street credibility’ now,” he said.

‘Top Gun’ Cars and Bikes Might Be Even Cooler Than Airplanes