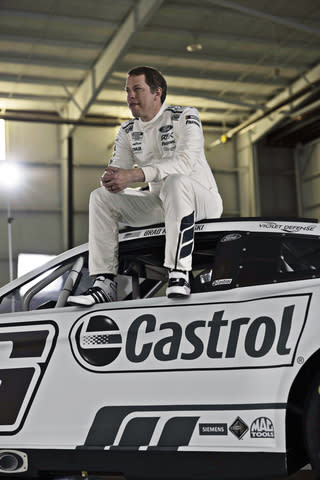 LINCOLN, Alabama, April 13, 2022–(BUSINESS WIRE)–Roush Fenway Keselowski Racing (RFK) is proud to announce that it will be bringing the Castrol-powered carbon neutral #6 Ford back to Talladega Superspeedway on Sunday, April 24. RFK Co-owner and driver Brad Keselowski will be driving the Castrol Mustang in the now iconic all-white paint job. RFK became the first carbon-neutral NASCAR racing team in 2021.

Roush Fenway Keselowski Racing (RFK) is proud to announce that they will be bringing the Castrol-powered carbon neutral #6 Ford back to Talladega Superspeedway on Sunday April 24th. #drivingforchange Image credit: Castrol.

The initiative is part of Castrol’s ongoing relationship with RFK and is another step towards supporting its partners in achieving their low carbon ambitions. RFK continues to make progress on its carbon neutral journey, having been able to reduce Scope 1, 2 and some 3 emissions associated with the team and in line with the internationally recognized PAS2060 standard that RFK has used to become carbon neutral.

From the Talladega race, both RFK cars will use engine oils specially formulated for RFK by Castrol with more than 50% RRBO (refined base oil). Refined petroleum, on average, produces 50% less carbon emissions over its life cycle compared to regular/conventional petroleum.**

Ahead of Sunday’s race, Castrol will lead a community-wide cleanup with Keselowski and fellow RFK driver Chris Buescher, who drives the #17 car, on Friday, April 22 (which is also Earth Day) at Oxford, Ala. Fans across the country are invited to join the effort by posting photos to Instagram of their own cleanups with the hashtag #drivingforchange for a chance to win the firefighter suit worn by Keselowski. Consumers must post photos of their local cleanups by May 8.

“Since RFK’s breakthrough commitment to carbon neutrality last year, we at Castrol have continued to seek ways to contribute to change and support our partner RFK,” said Rayne Pacek, Vice President of Castrol marketing for the Americas. “And we’re delighted to be involving fans this year in the community cleanup and to have Chris and Brad leading in Oxford, as well as raising awareness on the track.”

Speaking of RFK’s carbon-neutral journey, Brad Keselowski said: “None of us can change the world overnight, but every little bit counts and I’m proud to work alongside Castrol to raise awareness. J hope RFK and Castrol can help inspire others and help drive change.”

“We are thrilled to work with Castrol and RFK to help make Oxford, Alabama even more beautiful,” said Alton Craft, Mayor of Oxford, Alabama. “We hope our efforts can inspire fans across the country to participate – a chance for them to win Brad’s white fire suit doesn’t hurt either!”

Anyone interested in learning more about Castrol’s #drivingforchange initiative should head here.

*Reductions were made in accordance with the BSI PAS2060 standard for carbon neutrality, where an organization commits to reducing carbon emissions within its measured limits and reporting on that progress. The measured frontier and emission reductions were assessed in accordance with BSI PAS2060 and the achievement of carbon neutrality was ensured by ERM CVS, a third-party insurer. RFK QES available upon request.

**April 14, 2018 IFEU Heidelberg, LCA for regeneration of waste oil into base oil. Nabil Abdalla, Horst Fehrenbach. Based on average greenhouse gas emissions associated with four production processes of used oil refining versus crude oil refining, as calculated by the Institute for Energy and Environmental Research.

About Castrol
Castrol, a world leader in lubricant technology, serves consumers in more than 140 countries. Our flagship brands include Castrol® GTX® — a premium conventional engine oil; Castrol® GTX® High–Mileage™ – a premium synthetic blend designed for vehicles over 75,000 miles; the Castrol® EDGE ® range of advanced fully synthetic super premium engine oils that offer unsurpassed strength and performance; as well as our range of lubricants for commercial transport. To learn more about Castrol products and programs, please call 1-888-CASTROL or visit www.castrol.com/us

About Roush Fenway Keselowski Racing
RFK Racing, entering its 35th competitive season in 2022, offers an ownership lineup that combines one of the sport’s most iconic names, Jack Roush, along with NASCAR champion Brad Keselowski and Fenway Sports Group owner John Henry. Roush originally founded the team in 1988 and it has since grown into one of the most successful racing operations in the world, propelling him to be the first NASCAR owner to amass three hundred wins and eight championships, including consecutive NASCAR Cup titles. in 2003 and 2004. Keselowski, himself a former NASCAR Truck Series owner, joins the ownership fold while driving the iconic No. 6 Ford and brings the team a championship mindset after winning the 2012 NASCAR Cup Series championship. In 2007, Roush partnered with Henry, who also owns Major League Baseball’s Boston Red Sox and English Premier League’s Liverpool FC, to form Roush Fenway Racing. Off-track, RFK is a recognized leader and winner in NASCAR marketing solutions, having produced several award-winning social media, digital content and experiential marketing campaigns. Visit rfkracing.com and follow the team on all social platforms @rfkracing.