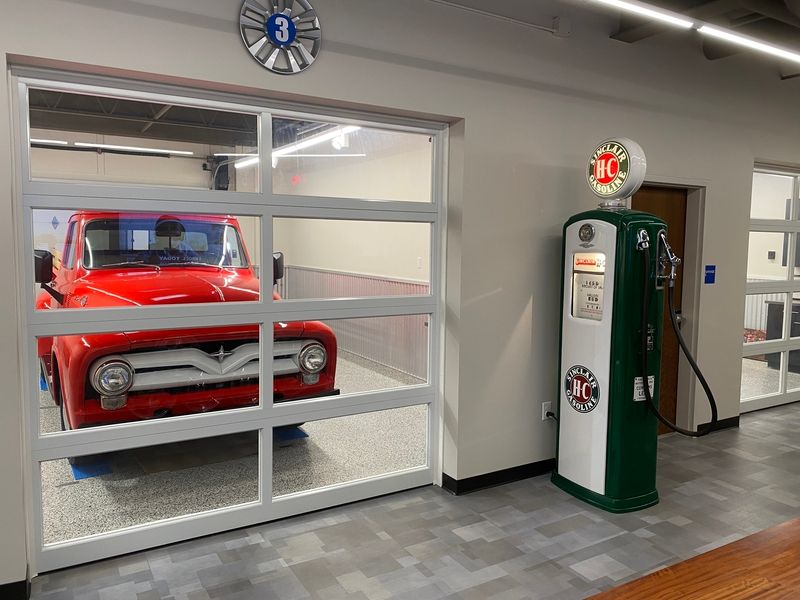 Business and love of the car crash into the Akron garage

If you need a small office space with an emphasis on indoor parking, Rick Briggs could have you and your car or truck covered.

Assuming you have a vehicle that is nice enough to deserve a seat, of course.

The semi-retired serial entrepreneur has opened a facility on Akron’s south side called The Garage.

“I just wanted a desk to work in,” Briggs said. “I had a few vintage cars… and I thought there must be other people like me, maybe later in life and retired or semi-retired. They need a place to work, so why not have fun? “

Briggs purchased an 11,000 square foot building at 2623 S. Arlington Road that was once used by Walsh University but had fallen into disrepair. It opened on June 1 in sparkling condition, with an all-new interior featuring premium automotive-themed decor, a new roof, and all-new mechanical systems.

To say the emphasis is on fun is perhaps an understatement. Expensive toys aside – cars and trucks – Briggs filled the place with enough memorabilia to make the locals sulk in embarrassment.

There’s the old Coca-Cola machine, for example – still running, full, and selling glass bottles of Coke for a penny. There is a mannequin in a full racing suit, greeting guests as they arrive, and a 1939 bumper car restored to pristine condition.

And that’s just the car stuff. Briggs also put a lot of effort into mirroring his well-known whimsical streak, with a nod to the old “Get Smart” TV show. There’s a phone booth with a shoe for a receiver and a working “cone of silence” Briggs made, which lowers from the ceiling above users’ heads, just like in real life. Sorry, like in the old TV show.

The garage also has a state-of-the-art security system, which Briggs said was a staple if he and his customers were going to store valuable vintage cars inside.

Currently, the building has six cars inside, including Brigg’s ’67 Mustang convertible. They fill the building’s five garage spaces – each temperature-controlled, accessible inside and outside the building, and 24 feet deep. But Briggs said at least two of the garage spaces will be made available for new tenants and will now have cars primarily for staging.

The building has 13 indoor rental office spaces ranging in size from 100 square feet to over 1,000 square feet, including a three-office suite with a common reception area.

Garage space costs $ 295 per month for tenants who have an office, he said, although Briggs said he might be willing to take a car from a non-tenant, if he it was a sufficiently cool vehicle.

So far, Briggs has attracted three full-time tenants – including a CPA, CEO / hire consultant, and software programmer, as well as a few people who use The Garage as a coworking space, he said.

Sadly, he lost a high-profile tenant and friend when famous Akron businessman Phil Maynard passed away earlier this year. A cardboard cutout of Maynard – his head attached to the body of a race car driver for an event while he was still alive – now occupies the desk Maynard would be using.

“Phil was a true close friend,” Briggs said. “He had ordered furniture and he was ready to move in… it was a sad day.”

Tenants who have moved into The Garage so far say they are very satisfied with the place and its ambiance.

Accountant Chris George, who is semi-retired but still works for a few clients, has been in the building since it opened – with his shiny red 1955 Ford pickup.

“It works great for me,” said George. “It’s close to where I live – I live just outside of North Canton. Access has been very easy. And for the people I still work with, it’s nice to have a good space to office… and everyone loves looking at everything in here. “

Another tenant is Phil Daetwyler, a resident of Portage Lakes, a contract CEO who works on business turnarounds, start-ups and helps prepare businesses for sale.

“It gives me a place to work, the Internet and printers, and you can be in the company of people who have been very successful in their careers,” Daetwyler said. “Or you can go to the bar and hang out and talk about the cars.”

Daetwyler doesn’t use a garage so far, but the automotive culture of the place seems to affect his mind.

“I don’t have a suitable car to go there,” he said. “But I want one.… I would like an Aston Martin, that’s what I wish I had in there. You know, a James Bond type car.”

Briggs said the rentals were going well, but he didn’t open the place to earn money rather than have an office for himself and a fun place to meet with other men like-minded businessmen and their cars.

“The idea is that someone can have a bunch of vintage cars, and that’s a building asset that other people can enjoy looking at,” Briggs said. “Even for people who aren’t car people it’s universal. They come and they like the big old truck or they say, ‘I was in the back of a Mustang like that. “”

Ford Mustang Mach-E Could Be Best Mustang Ever Made