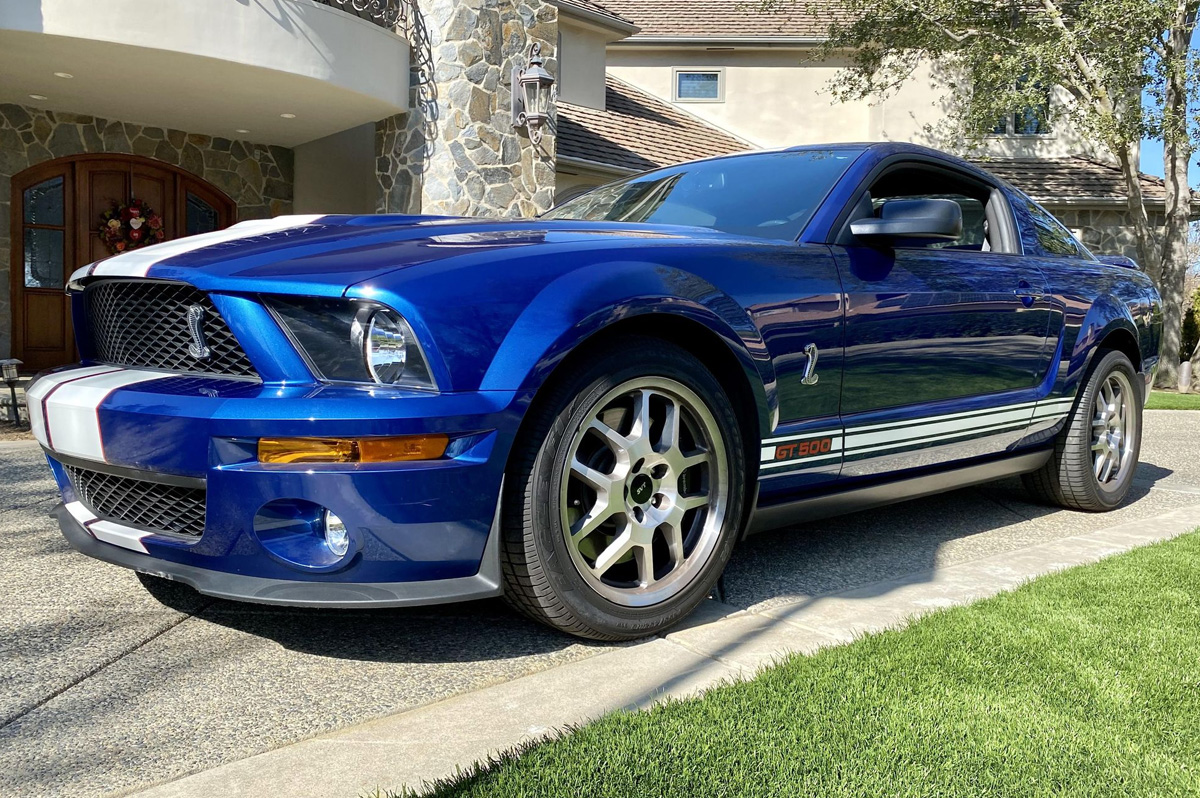 The 2022 Shelby GT500 Mustang is undoubtedly a monster car. It’s certainly no joke with a 760 horsepower supercharged V8 under the hood. Plus, its super-fast-shifting automatic transmission is a force to be reckoned with. However, another monstrous component of the GT500 is its price. Their base price is nearly $75,000. However, with markups and dealer options, they can easily top the six-figure price tag. That’s out of reach for most people. However, there is an option for Shelby fans on a more modest budget. Step into the S197 Ford Mustang GT500.

A recent Cars and Bids sale perfectly illustrates this advice. This 2007 Ford Mustang Shelby GT500 has only 8,900 original miles. It is finished in Vista Blue with white racing stripes and red stripes. Best of all, he’s lived his entire life in California, so those extremely limited miles were driven in a car-friendly climate. Finally, the seller was the original owner of the car. So finding a better example of this generation GT500 would be extremely difficult.

That’s the best part, though. Even considering the almost perfect condition of this vehicle, its final sale price was only $36,100. That’s less than half the base price of a new GT500. While it doesn’t quite have the insane engineering and technology that the new GT500 has, it’s still fantastic.

Under the hood of this S197 GT500 hides a supercharged 5.4-liter V8. This engine shares many similarities with that of the 2005 Ford GT. It develops 500 horsepower and 480 lb-ft of torque when stock. However, this car has an upgraded intake system, so it’s safe to assume it produces a bit more horsepower.

The real party stuff is the transmission, though. Unlike the current automatic-only GT500, this one comes with a Tremec six-speed manual transmission. This is enough to excite car enthusiasts! Also, even with manual shifting, Car and Driver reported that they managed a zero-to-60 mph time of just 4.5 seconds.

The 2007 GT500 still uses a solid rear axle instead of independent rear suspension. However, Mustang engineers at the time were confident that its handling characteristics were competitive with cars with IRS.

“We looked at the marginal improvement in drivability you could get by going to an IRS, and we didn’t feel the gain was worth the cost. The added benefit of an IRS is refinement, but not much more in terms of overall performance. We have good geometry and good shock-to-motion ratios, and we’re happy with the suspension we have. We won’t hesitate to ask you to do a driving comparison with IRS-suspended competitors,” Mustang program chief engineer Hau Tai-Tang told MotorTrend in 2005 at the time.

These snakes did indeed receive the suspension treatment from SVT, and Carroll Shelby was pleased with their handling performance. This brings us to another point on this generation GT500.

Many of these cars come with something we can promise you’ll never get to see on a modern GT500. It would be a real hand signature of the man himself, Carroll Shelby, on the glove box.

It’s so easy to get carried away with the latest. With the specs of a modern GT500, that’s completely understandable too. However, the S197 GT500 should not be considered “the old model”. Instead, it has its own outstanding heritage as the later Carroll Shelby GT500 itself had a contribution. For the prices they are offering right now, this seems like an absolute bargain. So if you want a taste of Shelby performance without breaking the bank, the S197 GT500 is definitely the answer.

RELATED: Someone Just Caught The New Ford Mustang S650 In The Wild