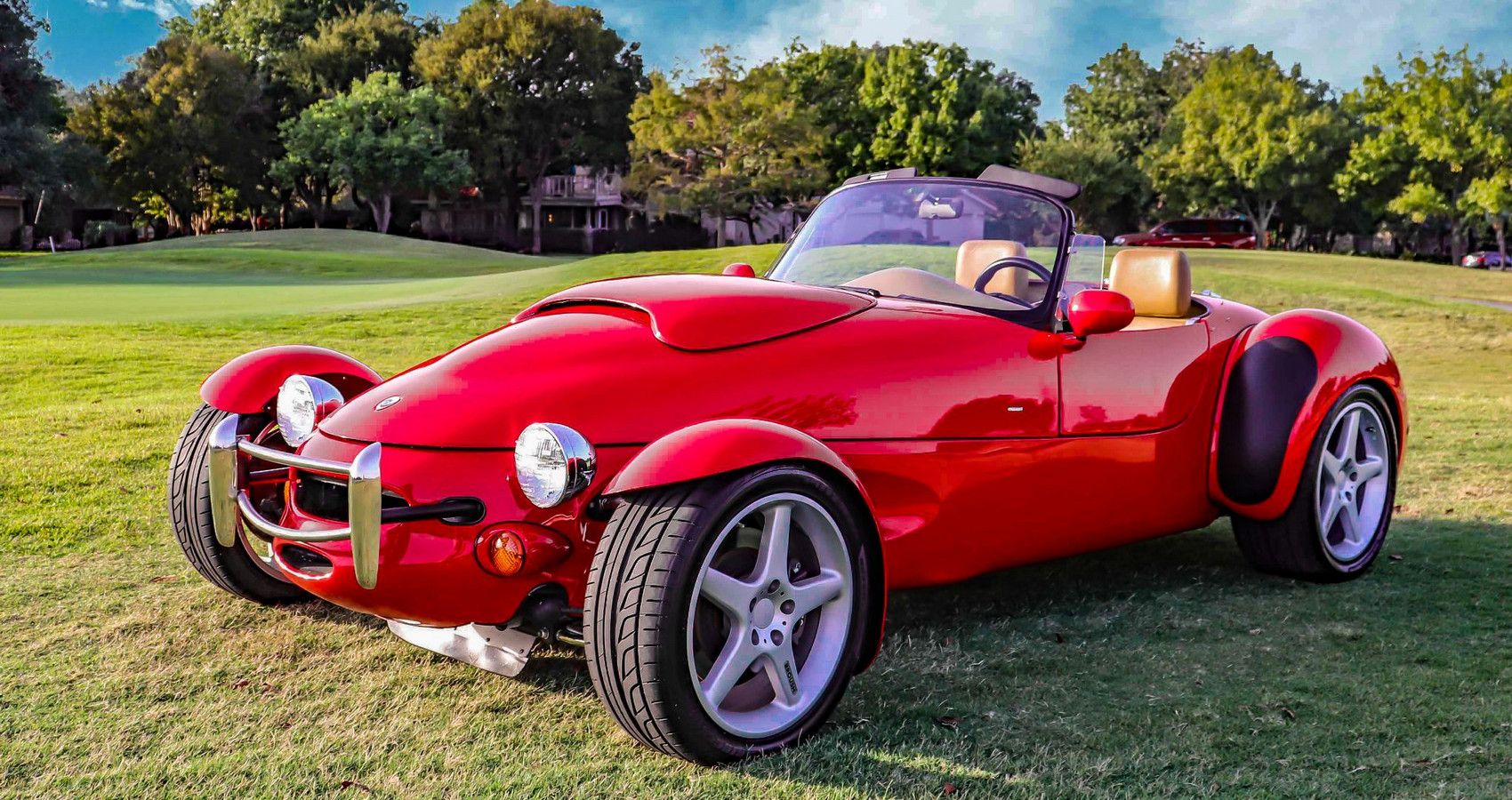 The 90s were a strange time for automakers. Pop-up headlights were starting to disappear, brands were stretching their creative legs with outlandish designs, and technology was advancing at a faster rate than anyone thought possible.

This led to automotive brands creating some truly remarkable sports cars that still stand today like the McLaren F1, endless Ferrari models and the unique Pagani Zonda. On the one hand, you had those cars that kids used to stick up posters in their rooms, and on the other, you had blatantly awful-looking cars that gave them back-to-back nightmares. We are here today to talk about the latter.

Kei cars are great, there’s no denying it, but one car the Japanese car market should never have downplayed was the Suzuki X-90. SUVs may be quirky, look at the Isuzu VehiCROSS for example, and even Suzuki’s own Jimny (also called the Samurai), but both of these vehicles have retained a sense of practicality.

The X-90, on the other hand, almost looks like a Honda Del Sol turned into a monster truck, but halfway through the build they didn’t have enough funds to continue the project, and they ended up with this no- so all-terrain all-terrain. So if you’re into real-life topless toy cars, the X-90 might be just what you’re looking for, but if you’re anything like us, go for the Jimny instead.

If you had no idea what the Pontiac Trans Sport was you would expect a hotter version of the Trans Am, imagine how heartbroken you must have been when you realized it was just a strangely smooth van. Multi-person vehicles were never a sight to behold, but Pontiac tried so hard to make their Trans Sport cool, but ended up creating an upside-down tub with four little wheels and a wacky interior.

From the back, the Trans Sport almost looked good, if a little bland, but its front end was anything but. Its windshield was the length of two football fields and its front end even longer. Not only was its exaggerated front end gross and out of proportion, it made city driving and parking much more difficult than necessary.

Initially, the Oldsmobile Aurora appeared to be the first performance-oriented Oldsmobile that the public would have seen. Like all American automakers, they packed it with excessive horsepower; its gnarly 4.0-liter V8 pumped out 250 hp. It was named after one of the greatest wonders of the world, the Northern Lights. Potential buyers were eager to see what the finished product would look like. Melted, that’s what it looked like.

We actually have a solid theory as to why the Aurora looked so sad too. We believe that after sculpting a prototype model of what the Aurora should have looked like, a designer neglected his work and left it outside in the sun while picking up the rest of the team to come admire his creation. . Unfortunately, when they returned to observe its automotive shine, it had melted in the sun, and they were forced to make this depressed-looking Oldsmobile sedan.

Nissan has created some amazing sports cars other than its Z line, like the various Silvia models, but one thing no one saw coming was a deal between the Nissan Silvia and the Toyota Supra. Behold, their bastard offspring, the NX2000.

Essentially, it was a revived Sentra SE-R, but it became the black sheep of the Nissan family. This bastard child looked awfully like his dad from the front resembling a catfish, from the side he looked like a goofy 300ZX, but from the back he looked by far the worst, resembling the taste of dry rice.

Related: Here are the best and worst Nissan sports cars over the years

Electric vehicles weren’t all flashy and insanely fast like they are today, see some of the very first electric cars were the biggest crashes the automotive industry has ever seen, and the GM EV1 is one culprits. Surprisingly, GM’s first attempt at an electric vehicle wasn’t all that bad; it had a 0-60 time of 8.4 seconds, and… well that’s about it, the rest of the car was just abysmal.

EV 1 could only go 100 miles, and only if you were gentle, it had a two and a half hour charge time, and worst of all, it sounded like a bottom child age of the 80s would draw an electric car to be: a literal flying saucer that could dive underwater and transform into a submarine.

We were just talking about melted cars, and here’s the perfect example of a car whose rear has been left in the sun’s UV rays. The Infiniti J30 was far from a bad luxury car, it was based on a Nissan Leopard after all.

But no matter how sophisticated, technologically advanced and flexible the interior was built, nothing could compensate for the J30’s obnoxious faded short rear and off-putting taillight bar.

The entire design of the Qvale Mangusta is just as confusing as its name suggests. You see, Italian car brands bring in some of the most creative minds in the world, and they often carve beautiful works of art onto wheels like the Alfa Romeo 8C, but the Mangusta…well, we don’t we just can’t put our finger on what’s wrong with that. It looks almost unfinished in a way.

As if the car’s front and rear lights were attached first to the body, then to its body and finally to the grille – if something didn’t stick, they were cut with safety scissors to fit flush . So with such interesting Outside, you’d expect it to have a voluptuous V12 sizzling under its hood, but in reality, it was just a Mustang V8 engine. Absolutely nothing makes sense about the Qvale Mangusta.

Somehow the Panoz Roadster manages to encapsulate Tom Selleck’s moustache, the lip pout of a 2010s Instagram influencer (once you see the little pout, that’s all you see) and the body of a constipated rabbit. Panoz figured there was a sea of ​​go-kart-like sports cars for sale in the 90s, so they had to stand out somehow. In an attempt to stand out from the crowd, they slapped a plate with the rightful owner’s name etched on top of the intake manifold.

In all honesty, we wish more manufacturers did that with their cars these days, but that’s where the cool aesthetics end. You really have to have an acquired taste, like someone who loves the smell of rotten eggs, to truly appreciate the aesthetic appeal of Panoz. Well, at least it drove like a real road-legal go-kart.

If that name sounds familiar, here’s why. Zagato is a bodywork company specializing in the individualization of sports cars, like the Aston Martin Vanquish for example, and the name Stelvio refers to a beautiful mountain pass in Italy which is also coincidentally where the name from Alfa Romeo’s large family SUV originates. So what does this Nissan have to do with any of these things? Jack squats.

It didn’t scream Italian beauty or handcrafted excellence, but rather a sheet of metal beaten with a butter knife. See, there was a quirk of the Nissan Autech Zagato, and we’re honestly on the fence about whether we like it or not… it’s those weird hood flares that house the freak show side mirrors. Luckily, only 104 of these Nissans were made and there’s little chance they’ll ever weigh on your eyes.

Related: 10 Italian Concept Cars We Want To Put Into Production

They say you should learn from your mistakes, but apparently in Italy they say something different. The Fiat Multipla had a lifespan of over a decade despite its most powerful engine only putting out 120 bhp and its design remaining almost identical throughout. Speaking of its design…many automakers draw inspiration from real-world objects like places, or sometimes even animals, but Fiat has taken a different approach when it comes to the Multipla.

The only conscientious inspiration they could have taken from the real world was to place 4 different cars on top of each other, smash them, then then try to stretch the blob lengthwise to create what looks like a bit like a family van. And so the multi-layered extravaganza was formed, or Multipla for short.

10 Auto Flops From The 2000s That Taught Automakers A Lesson

These 2000s cars were such huge flops that it would have been impossible for automakers not to learn from their mistakes.

Marnus Moolman is an aspiring young automotive writer from South Africa who is making a name for himself, despite his young age. His passion for cars translates into the real world through his many automotive details and will soon be opening his own workshop.