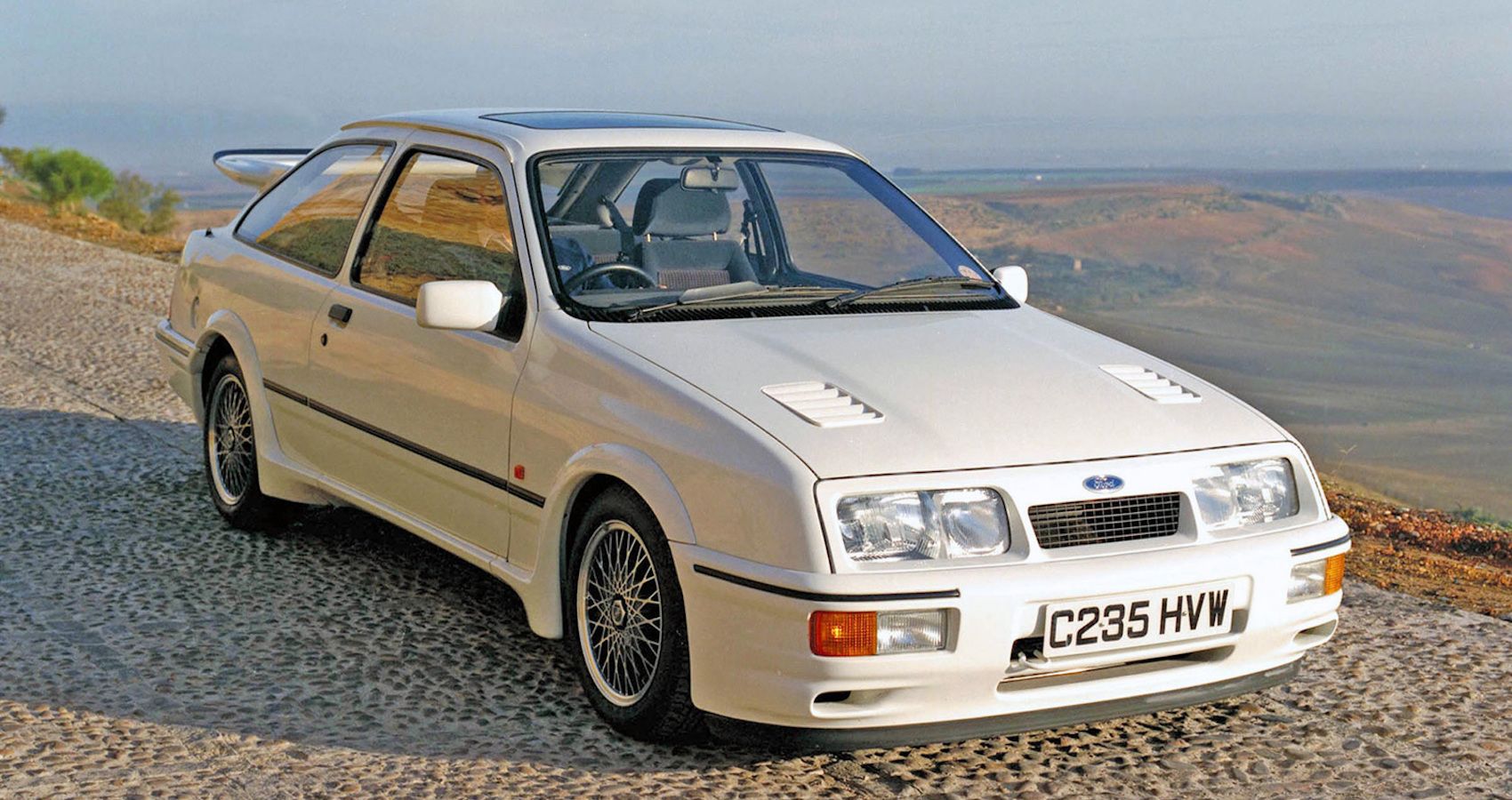 American multinational, Ford Motor Company, has produced some truly iconic and varied vehicles over the decades. The 1980s saw the rise of the everyday performance driver, from powerful hatchbacks like the Fiesta XR2 and Ford Escort RS Turbo to legendary sedans like the Sierra RS Cosworth. Economic uncertainty and a fuel crisis meant that the dedicated sports car had fallen somewhat out of favor, and Ford had to design new models to recoup sales.

With the end of the combustion engine performance car seeming inevitable, it’s time to look back at some of the best models Ford produced in the 80s.

Ford’s legendary Sierra RS Cosworth was released in 1986. The car was designed to allow Ford to compete in “Group A” racing, to achieve this 5000 road models had to be built in order to homologate the car.

The 2.0-litre “Cosworth” turbocharged 4-cylinder engine that gives the car its name sits under the hood. The car’s most distinctive feature is its expansive rear spoiler, known as the “whale tail”.

Related: A Detailed Look at the Ford Sierra RS Cosworth

The Capri was Ford Europe’s answer to the Mustang. The third generation car was released in 1978, remaining in production until 1986. 1982 saw the car gain a powerful 2.8 liter V6, which replaced the 3.0 liter Essex V6 previously installed but killed due to emission regulations.

The road-going RS200 was ordered in order to homologate the car for Group B rallying. Around 200 examples were produced, each fitted with all-wheel drive.

The car had a mid-engined configuration, based on a 1.8-liter turbocharged four-cylinder engine. The unit developed 253 hp and the car was fast, completing the 0-100 km/h in 6.1 seconds. Mated to a 5-speed manual gearbox, the car had a top speed of 140 mph. A more powerful “Evolution” model officially became the fastest accelerating car in the world, holding a Guinness World Record for no less than 12 years. This version took just 3.07 seconds to go from 0 to 100 km/h, which is exceptionally fast, even by today’s standards.

The hot Escort XR3i was produced by Ford from 1983 to 1986. The car was a hit with buyers, combining performance and affordability, while looking the part. The XR3i featured a 106 hp 1.6-liter engine.

To develop the car, Ford added fuel injection to the XR3’s engine and managed to extract more performance.

The ninth generation Ford Thunderbird was introduced in 1983, before being heavily revised during the final two years of production in 1987. The car’s exterior was modified to improve aerodynamics and a revised headlight design was added. been introduced.

The car was equipped with a 2.3-liter turbocharged 4-cylinder engine developing 190 horsepower. The downsized engine stood in contrast to many rivals, which were usually fitted with V8 units. The Thunderbird had a top speed of 137 mph, while 0-60 mph took 8 seconds.

The car’s appearance was a big strength, with lights mounted on the circular grille and an overall sporty look. Compared to many others on this list, the car didn’t get the recognition it deserved and therefore remains quite affordable.

The 1984 Mustang was the first car to be released by Ford’s Special Vehicle Operations (SVO) group. The purpose of the car was to attract gearheads to the brand, following increasing competition and profitability difficulties.

Under the hood, there was a 2.3-liter turbocharged 4-cylinder engine. The unit had enough thrust to blast the car from 0-60mph in just 7.5 seconds, while the top speed was 128mph. Around 10,000 were produced during its production run, making it quite an exclusive model.

Powered by a 1.6-litre turbocharged engine, the Escort developed 134bhp and earned its “RS” badge, being one of the fastest hot hatches on the market. The car had distinctive styling, with the majority of examples being finished in white and featuring seven-spoke alloy wheels and a small rear spoiler.

Notably, Princess Diana owned a custom version of the SVO division of the car, which came in a stunning jet black paint color that was not available from the factory. The car has just been put up for sale and will be auctioned on August 27, 2022 by Silverstone Auctions.

Like a kind of swan song, Ford introduced the Crusader to mark the end of Cortina production. The car was very well specified and came with a range of engine options from the base 1.3 liter to the top end 2.0 litre.

The car sold well and became one of Ford’s best-selling special edition cars. In total, about 30,000 copies were purchased. A sedan and wagon version were available, broadening the appeal and helping justify the sales success.

The 1987 Ford Mustang received a drastic facelift over the models that preceded it. Although the Mustang’s “Fox” body had been available for several years, the 1987 version brought the look up to date.

What is Mark Cuban going to do with the town of Mustang TX he owns?